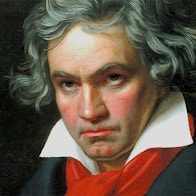 One of the crowning achievements of Western music, Beethoven's Ninth (and final) Symphony, epic in scale and character, is one of the earliest and still best-known examples of the use of human voices in a symphony. The beloved final movement contains the world-famous "Ode to Joy," the setting of a poem by Friedrich Schiller which has been the official anthem of the European Union since 1985, a symbol of peace and brotherhood. Although the Viennese public failed to appreciate a number of the composer’s later works, the premiere of the Ninth Symphony proved to be an incredible triumph for the ailing Beethoven—suffering by that time from total deafness, but nonetheless well enough to be present in the hall to enjoy his creation’s success.

medici.tv is the best online platform for live streaming Ludwig van Beethoven’s Symphony No. 9 in D Minor, offering you a VIP ticket to the most famous productions with world-class artists captured in the best audio quality and HD video. A cornerstone of the symphonic repertoire, Beethoven’s Ninth is one of the undisputed masterpieces of classical music, from the mysterious open fifths of its Allegro ma non troppo to the vibrant notes of the Molto vivace - presto and grandeur of the Andante maestoso, and completed by the majestic "Ode to Joy" theme of its final movement that has become known throughout the world as a symbol of human togetherness. Beethoven's Ninth is one of the most performed musical works by orchestras everywhere from New York to Paris and Beijing to Sydney, one that never fails to bring huge audiences together for an invariably emotional and fulfilling experience: watch a vibrant range of performances of Beethoven’s Symphony No. 9 on medici.tv in any place and at any time!

A seat at the greatest music venues to watch Beethoven’s Ninth Symphony streaming on medici.tv

A selection of our live streaming Beethoven’s Ninth performances are available for free to all registered users, and the rest can be unlocked with a subscription. Live video events stream right to your living room from the most famous concert halls, and you can watch our performances streaming on your biggest screens with AirPlay, Chromecast, and our new Roku app. No matter where you are in the world, you’ll be guaranteed virtual tickets at venues like the Staatsoper Berlin, the Glyndebourne, and many more. Watch one of the most celebrated Beethoven symphonies in the best performances of classical music all over the world!

The greatest artists in Beethoven's Symphony No. 9 on your #1 classical music streaming channel

Beethoven’s Ninth was composed between 1822 and 1824 and first performed on May 7, 1824, in Vienna. It features a four-movement structure, with the nontraditional choice to place the Scherzo (Molto vivace) movement before the slow Adagio molto e cantabile. The final movement is by far the longest, lasting nearly a half hour and containing a theme and variations that feature the “Ode to Joy” theme, Beethoven’s setting of a poem by Friedrich Schiller. The Ninth Symphony’s premiere was conducted by Beethoven himself, who was by then almost completely deaf. It is said that at the end of the symphony, Beethoven—who could not hear the music—was off by several bars and continued conducting, only to be turned around to see the rapturous applause of the audience who waved handkerchiefs, hats, and hands to make sure Beethoven could see the extent of their admiration. In 1997, Jonathan Del Mar published a new edition of Beethoven’s Symphony No. 9 that was intended to correct thousands of ostensible mistakes in the commonly used 1864 version published by Breitkopf and Härtel. Orchestras still refer to both scores today, and the orchestral numbers called for by Beethoven’s Ninth are, in any edition, the largest of any of his works, featuring large string, brass, percussion, and woodwind sections, as well as the famous choir that gives the Ninth its nickname; the “Choral” Symphony. Listen to this groundbreaking masterpiece with medici.tv’s online music streaming experience!