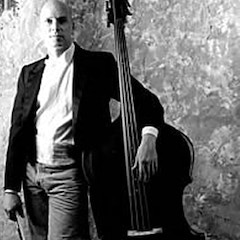 Leigh Mesh has been a member of the Metropolitan Opera Orchestra since 1993, where he is now the Associate Principal Double Bass. A graduate of the Curtis Institute of Music, he has given masterclasses at the Cincinnati Conservatory, the New World Symphony Orchestra in Miami, the Juilliard School of Music, the Manhattan School of Music, and has been the double bass coach of the UBS Festival Orchestra since its inception. Mr. Mesh has performed chamber music with the Tokyo and Brentano quartets, and has performed frequently at the Linton Chamber Music series, the Pensacola Festival, the Salt Bay Chamberfest, the Martha's Vineyard Chamber Music Society, the Mainly Mozart Festival, and with the MET Chamber Ensemble. He has been heard onstage in Verbier since 2004. Mr. Mesh lives with his wife Nancy Wu, and his children, Guinevere and Wolfram in New York, and pursues skiing and cycling whenever he can. In fact, he has finally given up normal alpine skiing, and is proud of the fact that he is now proficient enough to be able to telemark ski in Verbier if he has the opportunity!