Live
Certain chapters are not available.
Thank you for your understanding.
Program
With the support of

The XV International Tchaikovsky Competition is coming to an end, and time is coming to award the prizes to the young talents who shined through with their exceptional performances during the two weeks of this prestigious competition! An event to watch live on medici.tv and on tch15.medici.tv

For the first time, medici.tv is the official partner of the Competition and has broadcast all the performances and more during the XV International Tchaikovsky Competition, live from Moscow and Saint Petersburg. For the occasion, medici.tv has created a brand new website: http://tch15.medici.tv. The main website medici.tv is also broadcasting the Opening Concert, the Final Rounds, the Awards Ceremony and the Concerts of the Laureates on medici.tv!

During this award ceremony, six pianists, six violinists, six cellists, and eight singers will be rewarded.

This award ceremony will undoubtedly be a life-changing experience for these young prodigies. The most iconic winner of the International Tchaikovsky Competition was of course pianist Van Cliburn, in 1958. During the last International Tchaikovsky Competition, First Prizes were awarded to pianist Daniil Trifonov, cellist Narek Hakhnazaryan, male singer Jong Min Park and female singer Sun Young Seo, and no first prize was given to a violinist. Since then, these young rising stars acquired an international fame and now play in the most prestigious venues. 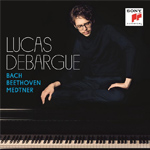