Live
Certain chapters are not available.
Thank you for your understanding.
Program
With the support of

medici.tv broadcasts the Berlin Konzerthaus's homage to the world-famous violinist and conductor Yehudi Menuhin, who would have celebrated his 100th birthday on 22 April 2016. This concert stars Daniel Hope and the Konzerthaus Orchester Berlin conducted by Iván Fischer.

Under the baton of Hungarian conductor Iván Fischer, the Konzerthaus Orchester Berlin performs pieces by Enesco, Elgar and Bartók. The concert opens with the Prélude à l'unisson from Enesco's Suite for Orchestra No. 1 in C Major. Afterwards, Elgar's Concerto for violin and orchestra in A Minor, Op. 61 is to be played by Daniel Hope and the orchestra—a Concerto recorded with splendor by Menuhin and the London Philharmonic. Daniel Hope, a former student of Menuhin has just dedicated an album to his mentor who used to be also a close friend of his. He says about him: "Yehudi Menuhin is the reason I became a violinist." The concert closes with Bartók's Concerto for orchestra.

The Konzerthaus Berlin pays homage to the world-famous violinist and conductor Yehudi Menuhin. Menuhin, as one of the most renowned violinists of the 20th century, would have celebrated his centenary on 22 April 2016. When this brilliant artist was at his best, the music seemed to flow out of him. He cast a spell on all who met him. In addition to his fame as an exceptional musician he has been equally recognized as a committed humanitarian. 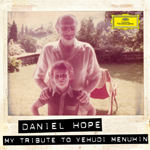