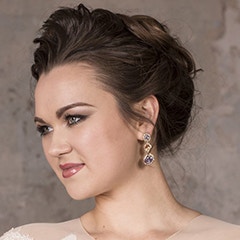 Graduated from the Rimsky-Korsakov Saint Petersburg Conservatory studying under Prof. Tamara Novichenko (2012). She was a prize winner at the International Zara Dolukhanova Vocal Competition "Amber Nightingale" in Kaliningrad (2008). She was winner of the 4th Bibigul Tulegenova International Vocal Competition in Almaty (2010) and the Baikal International Vocal Competition in Ulan-Ude (2011) and also finalist of the Competizione dell’Opera in Moscow (2011). In 2014 she won third prize and a prize for best performance of a Russian aria at the 5th Galina Vishnevskaya Opera Singers Competition and second prize at Le Grand Prix de L’Opera in Bucharest. Since 2011 she has been singing in the troupe of the Mikhailovsky Theatre. Her repertoire includes the parts of Susanna (Le Nozze di Figaro), the Queen of the Night (Die Zauberflöte), Oscar (Un Ballo in Maschera), Musetta (La Bohème), Eudoxie (La Juive), and Martha (The Tsar’s Bride) among others. She has toured in China and Japan. Since 2015 she performed as a guest soloist in many European theatres in Germany, Switzerland, France, Sweden and also in Russia Bolshoy Theatre.

All videos related to Svetlana Moskalenko (1)