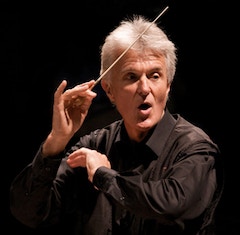 Simon Carrington, Yale University professor emeritus, has enjoyed a long and distinguished career in music, performing as singer, double bass player and conductor, first in the UK where he was born, and latterly in the USA. From 2003 to 2009 he was professor of choral conducting at Yale University and director of the Yale Schola Cantorum, a 24-voice chamber choir which he brought to national and now international prominence, attracting the interest of his successor, Masaaki Suzuki, director of the Bach Collegium Japan. During his Yale tenure he led the introduction of a new graduate voice degree for singers specializing in oratorio, early music and chamber ensemble, and, with his faculty colleagues, guided two Yale graduate students to their first prize wins in consecutive conducting competitions at American Choral Directors Association National Conventions. From 2001 until his Yale appointment, he was director of choral activities at the New England Conservatory, Boston, where he was selected by the students for the Krasner Teaching Excellence Award and from where he received an Honorary Doctorate in 2014, and from 1994 to 2001 he held a similar position at the University of Kansas.

Prior to coming to the United States, Mr. Carrington was a creative force for twenty-five years with the internationally acclaimed British vocal ensemble The King ‘s Singers, which he co-founded at Cambridge University. The King’s Singers gave 3,000 performances at many of the world ‘s most prestigious festivals and concert halls, made more than seventy recordings, and appeared on countless television and radio programs, including nine appearances on the Tonight Show with the late Johnny Carson!

In the early days of The King's Singers he also maintained a lively career as a double bass player, first as sub-principal of the BBC Philharmonic Orchestra and then as a freelance player in London. He specialised in continuo playing, particularly for his Cambridge contemporary John Eliot Gardiner, with whom he made a number of recordings, but he also played with all the major symphony and chamber orchestras under such diverse maestri as Claudio Abbado, Daniel Barenboim, Benjamin Britten, Pierre Boulez, Sir Colin Davis, Carlo Maria Guilini, Otto Klemperer, Ricardo Muti, Georg Solti, and George Szell. As a teacher of conductors himself for fifteen years he only wishes he'd paid more attention!

He now keeps up an active schedule as a freelance conductor and choral clinician, leading workshops and master classes round the world. He has taught young conductors at the Royal Academy of Music, London, the Liszt Conservatorium, Budapest, Hungary, the University of the Andes, Bogota, Colombia, the World Symposium on Choral Music in Argentina and the Schools of Music at Eastman, Temple, and Indiana among many others in the US. He has recorded master classes on two commercial DVDs - at Westminster Choir College in the US (GIA) and at the Three Choirs Festival in the UK (Masterclass Media Foundation). This season his conducting engagements include the Berlin Rundfunk Chor, Ars Nova Copenhagen, Collegium Musicale, Tallinn (Estonia), Coro Casa da Musica, Oporto (Portugal), Tokyo Cantat, Gondwana Choral School, Australia, Houston Chamber Choir, Canto Armonico, Boston, and Yale Schola Cantorum. He leads annual conducting courses at the Chamber Choir Festival in Sarteano (Italy), and the Yale Summer Festival in Norfolk, Connecticut, and contributed a chapter on rehearsal technique to the Cambridge Companion to Choral Music.

He divides his time between London and southwest France, where he lives with Hilary, his wife of 45 years. Their daughter Rebecca, cellist, singer, impressionist and comedian, lives in Berlin, and their singer-songwriter son James makes his home in Los Angeles.

All videos related to Simon Carrington (1) 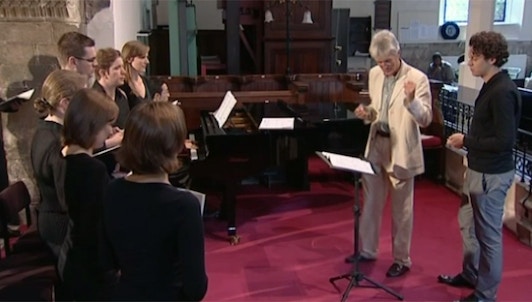