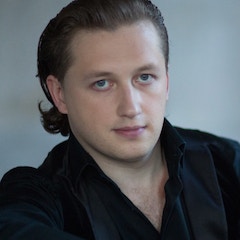 Graduated from the Moscow Conservatory studying under Prof. Vladimir Ivanov (2004-2009) and continued advanced studies under him. During 2013 studied at the University of Music and Performing Arts in Graz under Prof. Boris Kuschnir. At present he is taking instruction from Lidia Baich at the Vienna Conservatory. He has won prizes in international competitions, among them the 5th Niccolò Paganini International Violin Competition in Moscow (2007, second prize), the competition in Astana (2008, grand prix), in Seoul (2012, second prize), and the 8th Aram Khachaturian Competition in Yerevan (2012, first prize). In 2011 he participated in the XIV International Tchaikovsky Competition. He performs in cities throughout Russia, Austria, Belgium, China, and Korea among other countries. Since 2008 he has been as soloist at the Saint Petersburg House of Music, and since 2012 soloist for the Moscow Philharmonic. He plays the “ex-Szigeti” instrument made by Pietro Guarneri and provided by the Neva Foundation.