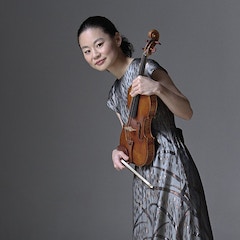 The violinist Midori is recognized not only for the evolution and scope of her 29-year career as one of the most dazzlingly gifted performers before the public, but increasingly for the prescient and innovative community engagement initiatives to which she devotes a substantial amount of her energies and resources worldwide on an ongoing basis. Named a Messenger of Peace by U.N. Secretary-General Ban Ki-moon in 2007, she has created a new model for young artists who seek to balance the joys and demands of a performing career at the highest level with a hands-on investment in the power of music to change lives.

In the 2011-2012 season, Midori will deepen her commitment to community engagement initiatives throughout the world while performing concerts in twelve countries on four continents. Among her appearances with orchestra will be two weeks with the Minnesota Orchestra under Osmo Vänskä; she will bring the Britten concerto to both Washington D.C. and Copenhagen, in performances with the National Symphony under Christoph Eschenbach, then the Royal Danish Orchestra under John Storgårds; she will appear both in Birmingham and at the London Proms with the City of Birmingham Symphony Orchestra and conductor Andris Nelsons; she will play the Walton concerto with Vasily Petrenko and the Royal Liverpool Philharmonic Orchestra, and the Beethoven concerto with the Czech Philharmonic under Petr Altrichter. The season also features four European recital tours. The unifying constant throughout the year will be Midori's ongoing devotion to her students at the Thornton School of Music at the University of Southern California, where she is both Jascha Heifetz Chair and Chair of the Strings Department. Midori thrives amidst the challenges presented by her full-time career as educator and administrator at a major university. To these commitments she adds substantial periods of time devoted to the four community engagement programs she has founded in the U.S. and Japan: Midori & Friends, Partners in Performance, Orchestra Residencies Program, and Music Sharing.

Midori's involvement with community engagement began in earnest in 1992. Upon learning of severe cutbacks to arts education in New York City public schools, she conceived of an organization she called Midori & Friends. What started with just individual personal visits by Midori to schools in underserved neighborhoods of the city has over the last 20 years grown into a multi-tiered 26-week course for school children, including instrument instruction, elementary music theory, choral singing and community concerts. Over 190,000 children have participated in Midori & Friends programs in every borough of New York City in the succeeding years (www.midoriandfriends.org).

With the belief that chamber music in small communities deserves support, Midori took the money she won as part of the Avery Fisher Prize in 2001 and established a new organization, Partners in Performance. The raison d'être of the organization is to stimulate and reinforce local interest in recitals and chamber music, especially in smaller communities without the advantages of large urban centers, which are automatically included in every major concert tour. To the winning applicant organizations, Partners in Performance awards a recital by Midori and, in the following season, a Young Artists Program recital by a rising star -both to be played, at substantially reduced rates, as part of the winning organization's regular season. Proceeds from the concerts are used by the community to support its chamber music programs. Midori has encouraged other established artists to participate in Partners in Performance programs, and in the 2009-2010 season pianist Jonathan Biss joined the team. This season, Partners in Performance will sponsor concerts by Midori in Morehead, Kentucky and Melbourne, Florida (www.pipmusic.org).

In 2004, Midori established her Orchestra Residencies Program, an initiative designed to support and encourage youth orchestras in the U.S. Each year two winning applicant youth orchestras are chosen by independent committee for week-long residencies by Midori, who collaborates in a wide range of activities with both the youth orchestras and their partner professional orchestras. Midori plays with each orchestra, participates in local fund-raising, political arts advocacy, masterclasses, chamber music workshops and team-building social events that serve to strengthen morale, establish new partnerships, and solidify the standing of the youth orchestra in the community. In previous years, Orchestra Residencies Programs have been conducted in Alaska, Minnesota, North Dakota, Iowa, New Mexico, South Dakota, Vermont, North Carolina, Illinois, Alabama, Montana, Tennessee and Iowa. In 2011-2012, Midori will bring programs to Alexandria, Virginia and Eugene, Oregon. In 2010 Midori expanded the mission of the program to include collaborations with orchestras outside the U.S. The first of these initiatives, in the 2009-2010 season, took place in Costa Rica; the second, in the 2010-2011 season, in Bulgaria. In the coming season Midori will conduct an international Orchestra Residencies Program in Peru.

Music Sharing is an organization based in Tokyo whose goal is to augment the Japanese music curriculum by bringing Western classical music and traditional Japanese music of the highest caliber to young people throughout Japan. Midori and other visiting artists bring performances to children in schools, hospitals and institutions for the disabled. The children enjoy the music not only as listeners but also as participants. Music Sharing aims to raise cultural awareness, provide a well-rounded education, and inspire in children an appreciation for the life-changing power of live music. During her Music Sharing and recital tours of Japan in Spring 2011, Midori added visits to two evacuation centers in Fukushima Prefecture, to offer support to the many Japanese families still unable to return to their homes in the wake of the devastation caused by the earthquakes and tsunami of March 2011. In 2006 Music Sharing also expanded to include international programs (ICEP: International Community Engagement Program). Each year Midori and young musicians chosen by international audition engage in a two-part program, first spending two weeks in a host country in Asia bringing Western chamber music to young people and learning in turn about native musical traditions; the second a series of concerts and workshops in Japan later in the same season. The purpose of ICEP is to offer children, especially those in difficult circumstances, the opportunity to experience the beauty and joy of music and, equally, to offer the participating young visiting musicians an opportunity to widen their horizons and learn more about community engagement. Midori has brought ICEP programs to Vietnam, Cambodia, Indonesia, Mongolia and Laos.

Midori's enthusiasm for playing and supporting the music of our time has blossomed into a significant and ongoing commitment. Over the years she has commissioned everything from works for solo violin to major concertos. Midori and violinist Vadim Repin have also joined forces in an initiative to commission new works for encores and promotional events, the Midori/Repin Commissioning Project, administered through Meet the Composer. Over all, the individuals Midori has sought out to create new repertoire for the violin represents an impressive array of some of the most talented composers of our time, including Lee Hyla, Rodion Shchedrin, Krzysztof Penderecki, Derek Bermel, Brett Dean, Einojuhani Rautavaara, Michael Hersch, and Pierre Jalbert. Among the composers whose newly commissioned works Midori will be premiering in seasons to come are Peter Eötvös and Johannes Maria Staud.

Midori made her first recording at the age of 14 for Philips -she played music of Bach and Vivaldi with the St.Paul Chamber Orchestra under the direction of Pinchas Zukerman; her second recording, also for Philips, featured works by Paganini and Tchaikovsky with the London Symphony and conductor Leonard Slatkin. All her other recordings are on Sony Masterworks, the most recent being an album joining sonatas of J.S.Bach (Unaccompanied No.2 in A minor, BWV 1003) and Bartók (No.1, Sz.75); and a 2-CD compilation of catalogue material, The Essential Midori. In 2003 the then-designated Sony Classical released Midori's recording of the Bruch G minor and Mendelssohn E minor concertos, recorded live with the Berlin Philharmonic under the direction of Mariss Jansons. This recording won Germany's coveted Deutsche Schallplattenpreis, as did her recording of French recital repertoire. The first Super Audio CD issued by Sony Classical featured Midori's recording of Mozart's Sinfonia Concertante, K.320d, with violist Nobuko Imai, as well as the reconstructed Concerto in D Major for Violin and Piano (K.315f) with Christoph Eschenbach as both pianist and conductor of the NDR Symphony Orchestra. Other concerto recordings include a disk pairing the Tchaikovsky Violin Concerto with Shostakovich's Violin Concerto No.1, both recorded live with Claudio Abbado and the Berlin Philharmonic; the Dvořák Violin Concerto with Zubin Mehta and the New York Philharmonic, also recorded live; the two Bartók Violin Concertos with the Berlin Philharmonic under Mr. Mehta; and the Sibelius Violin Concerto with Bruch's Scottish Fantasy, with Mr.Mehta and the Israel Philharmonic. Among Midori's other Sony Classical CDs is a Grammy-nominated recording of the Paganini Caprices for Solo Violin. Midori's recital recordings include the Elgar and Franck sonatas, an album of French sonatas, and Encore!, a collection of virtuoso showpieces. Sony's live recording of Midori's Carnegie Hall recital debut (October 1990), is also available on CD and DVD.

In 2004, Midori joined the ranks of published authors with the release in Germany of a memoir titled Einfach Midori (Simply Midori), for the publisher Henschel Verlag.

Midori was born in Osaka, Japan, in 1971 and began studying the violin with her mother, Setsu Goto, at a very early age. In 1982, when Zubin Mehta first heard her play, he was so impressed that he invited her to be a surprise guest soloist for the New York Philharmonic's traditional New Year's Eve concert, on which occasion she received a standing ovation and the impetus to begin a major career.

Midori's violin is the 1734 Guarnerius del Gesu "ex-Huberman." She uses four bows -two by Dominique Peccatte, one by François Peccatte, and one by Paul Siefried.

All videos related to Midori (4) 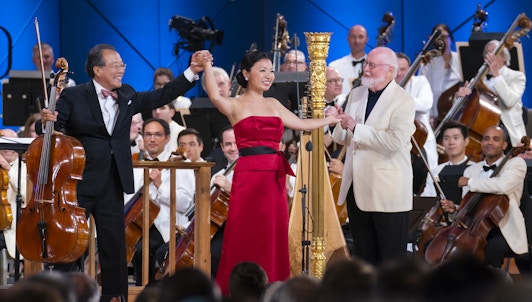 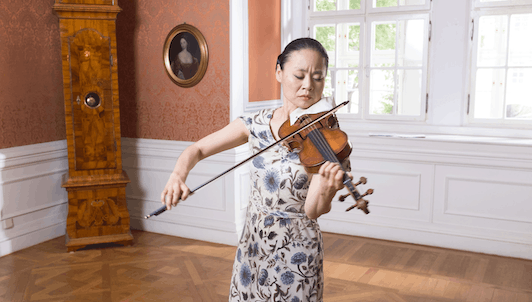 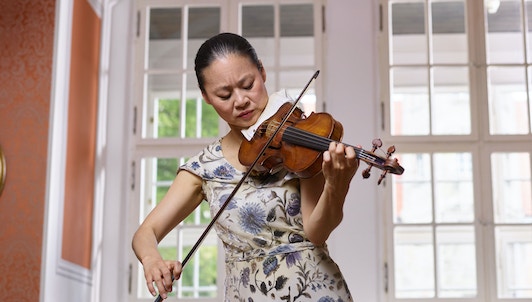 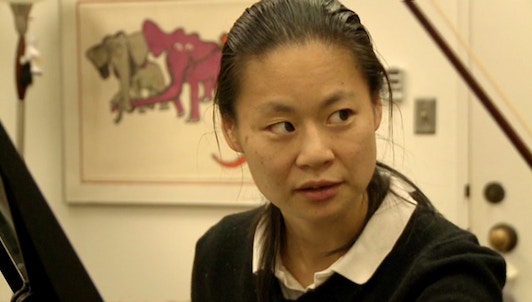 Explaning our passion for music