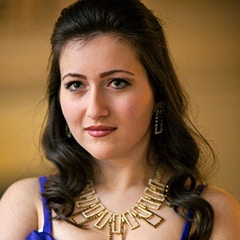 Received her bachelor’s degree at the Yerevan State Komitas Conservatory in the class of Prof. Susanna Martirosyan (2014). In 2009 she won at the Renaissance International Contest-Festival in Gyumri (Armenia). In 2013 she won a gold medal at the 7th Youth Delphic Games in Kazakhstan, was awarded the Presidential Prize of Armenia, and came in second at the 6th International Competition of Opera Singers “Saint Petersburg”. In 2014 the singer was selected to join the Young Artists Vocal Academy at the Houston Grand Opera. That same year she won a prize at the 33rd International Hans Gabor Belvedere Singing Competition in Dusseldorf. She also won the 7th Bibigul Tulegenova International Vocal Competition in Astana (Kazakhstan) and received fourth prize at the 6th China International Voice Competition in Ningbo. In 2015 she won the 27th Concert of Arias: Eleanor McCollum Competition for Young Opera Singers at the Houston Grand Opera.