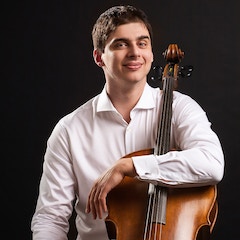 He graduated from Music College Sigismund Toduță (Cluj-Napoca), under Prof. Adalbert Torok and from the University of Music and Performing Arts from Vienna, under Prof. Valentin Erben and Robert Nagy. He continued his studies afterwards at the Superior Conservator from Paris, under prof. Marc Coppey. After two years as a member of Verbier Festival Orchestra, he is named first cello for the Pforzheim Philharmonic from Baden-Wurttenberg, Germany.