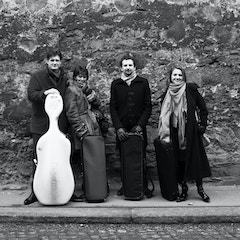 The Zurich-based Gringolts Quartet was founded in 2008, born from mutual friendships and chamber music partnerships. What unites the four musicians is the immense joy they get from performing together and their passion for the high demands presented by the string
quartet repertoire.

Aside from the classical repertoire for string quartet, they are also dedicated performers of contemporary music, including string  quartets by Marc-André Dalbavie, Jörg Widmann and Jens Joneleit. They have already had the opportunity to collaborate with eminent  artists such as Leon Fleischer, Jörg Widmann, David Geringas, Malin Hartelius, Christian Poltéra and Eduard Brunner. Highlights from the past seasons include performances at the Salzburg Festival, Lucerne Festival, Gstaad Menuhin Festival, St Petersburg Philharmonia, L’Auditori Barcelona, Sociedad Filarmónica de Bilbao, Società di Concerti in Milan, Louisiana Museum Copenhagen, and the Kasseler Musiktage.

The Gringolts Quartet’s debut recording with works by Robert Schumann was released in 2011. Together with David Geringas the Gringolts Quartet participated in the world premiere recording of Walter Braunfels’ quintet in 2012, which was awarded a “Supersonic Award,” as well as an ECHO Klassik award. In 2014 they garnered attention with their Brahms CD; in 2016 their CD with quintets by
Glazunov and Taneyev with Christian Poltéra was awarded the Diapason d’Or. Their latest album with Schönberg’s string quartets 2 & 4 with Malin Hartelius was released on BIS records in July 2017.