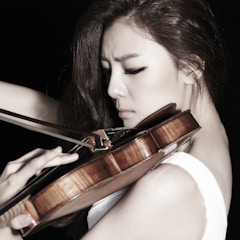 Studied at the Lübeck University of Music under Prof. Zakhar Bron. She was a famous child prodigy who performed with the Leipzig Gewandhaus Orchestra, the Hamburg Symphony Orchestra, and the Seoul Philharmonic Orchestra since the age of 5. At 9 she recorded Beethoven’s Triple Concerto and a solo programme for the Teldek label. When she was 11, she suffered a serious injury to her hand and was unable to play the violin for several years. Subsequently she studied at the Korean National University of Arts under Prof. Nam-Yun Kim and was a prize winner in several international violin competitions: in Seoul (2009, first prize), in Hannover (2009, second prize), and in Sendai (2010, first prize). In 2010 she won the International Violin Competition of Indianapolis and also took five special prizes. She performs all over the world and plays with the most accomplished orchestras. In 2011 her solo album of violin pieces Modern Solo was released by Decca. She plays the violin 'Ex-Strauss', made by Antonio Stradivarius in 1708, generously on loan from Samsung Cultural Foundation of Korea since 2015.