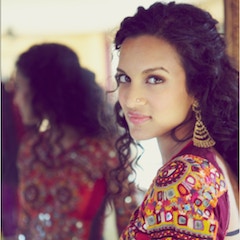 Sitar player and composer Anoushka Shankar has emerged as one of the leading figures in World Music today. She is deeply rooted in Indian classical music, having studied exclusively with her father, the legendary Ravi Shankar, and is now one of the foremost performers in that tradition. In tandem with this, she has flourished as a performer and composer, exploring fertile ground in the crossover between Indian music and a variety of genres including electronica, jazz, flamenco and Western classical music.

Born June 9, 1981, Anoushka has been playing and studying the sitar with her father since she was nine. At age 13 she made her performance debut in New Delhi. That same year, Anoushka entered the recording studio for the first time, to play "Adarini" on her father's album In Celebration. Two years later she made her debut as a conductor on her father's Chants Of India album, produced by George Harrison. Shortly thereafter she signed an exclusive record contract with Angel/EMI, and in the autumn of 1998 her first solo recording, Anoushka, was released to critical acclaim. Anourag (2000), Anoushka's second release, expanded upon and refined what she had previously recorded, and was followed by Live at Carnegie Hall (2001), which garnered her first Grammy nomination, making her the youngest-ever nominee in the World Music category.

With three classical sitar recordings under her belt, she was in increasing demand as a touring artist, and over the next few years she established a growing international reputation as a classical sitarist, playing as many as 80 concerts per year. At this time, conscious that she was maturing all the time as a performer and composer, Anoushka decided not to make her next album until she felt she was ready.

A highlight of 2002 was the Concert for George, a tribute to the late George Harrison at London's Royal Albert Hall, in which she conducted a new composition written by her father, Arpan, which featured Eric Clapton on solo guitar. Anoushka also performed Harrison's "The Inner Light" that evening. Spreading her wings, she turned to writing and acting too: in 2002 she authored the book Bapi: The Love of My Life, an intimate biographical portrait of her father; and in 2004 she earned a Best Supporting Actress nomination from India's National Film Awards for her debut role in Dance Like a Man, the feature film by Pamela Rooks. That same year, she was chosen as one of 20 Asian Heroes by the Asia edition of Time magazine. She subsequently became the first Indian ambassador for the United Nations World Food Programme.

By 2005 the time was right for a new phase. Previously, Anoushka had recorded and performed primarily as a soloist, interpreting the music of her father. While she continued to enjoy performing in the Indian classical realm and to tour with her father (as she has done ever since), on Rise, her fourth album, she composed, arranged and produced her own music, performing with a handpicked ensemble of brilliant musicians. She was now confident enough to stretch her repertoire: "It was the first record that I composed and envisioned, so it made sense that it should represent more of the types of music I've listened to in my personal life. Before, they had always been separate from my role as a classical sitar player. But they didn't have to be so separate." Fusing East and West, employing both acoustic and electric instrumentation, the album marked a new departure for Anoushka. Rise gave Anoushka another Grammy nomination in the Best Contemporary World Music category. In February 2006 she also became the first Indian to play at the Grammy Awards.

Anoushka toured extensively again in the wake of the album, forming the Anoushka Shankar Project in order to present her new non-classical ensemble compositions to a live audience. This group consists of instrumentalists from various musical styles, with changing personnel; the music always draws deeply from India's rich musical heritage, but the group serves also to maintain a clear distinction between this more experimental work of Anoushka's and her classical Indian concerts.

In 2007 Anoushka collaborated with Karsh Kale, the Indian-American producer, composer and multi-instrumentalist, to jointly create the album Breathing Under Water, which showed an even deeper grasp of the fusion of Eastern and Western music. This album features a rare guest appearance by her father, and well as contributions by her half-sister, Norah Jones, Sting and others. "On Breathing Under Water I felt I could push further in riskier ways for me," explains Anoushka, "whether it was working with a string orchestra, having vocals in English, or using conventional Western song structures and chords. Karsh and I share many types of musical backgrounds, but also come from very different spaces, so we were able to make a very large record in a way that I don't think either of us could have done alone, in that it crossed all of those genres." Critics were unanimous in their praise, and the album was launched in a concert in front of an audience of 14,000 at the 2007 Stern Grove Festival.

Her work now is notable for the way she has applied her expertise as a very fine Indian classical musician, and the profundity of the Indian raga framework, to working with top-quality musicians from a range of traditions, creating innovative music that appeals to her own generation as much as to that of her father.

Today, between her homes in New Delhi and California, and more recently London, she continues to stretch out in different directions. She has made guest appearances on recordings by other artists, among them Sting, Lenny Kravitz and Thievery Corporation. Meanwhile her developing work with Western classical musicians has included duetting with acclaimed violinist Joshua Bell at the 2007 Verbier Festival. Back in 2000 she also appeared at the Evian Festival in a sitar-cello duet with Mstislav Rostropovich, and in 1998 had duetted with flautist Jean-Pierre Rampal, playing both sitar and piano. She has also performed as the soloist in performances of her father's 1st Concerto for Sitar and Orchestra, while in January 2009 she was the sitar soloist alongside the Orpheus Chamber Orchestra for the series of concerts premiering his 3rd Concerto for Sitar and Orchestra.

"I see all these as ways for me to keep growing and remain really fresh," says Anoushka. "I love getting to explore different avenues in music, and whether that's playing with my father - which is one kind of ultimate experience in purely classical music - or having a band that's presenting my vision of classical music in a different way, or collaborating with different artists or an orchestra, I revel in getting to do all these things.