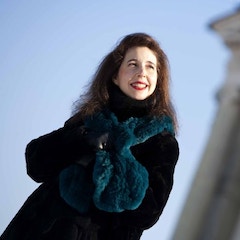 Angela Hewitt has established herself as one of the world’s best known and most respected pianists not least through her superb, award-winning recordings for Hyperion. Her ten year project to record all the major keyboard works of Bach has been described as “one of the record glories of our age” and has won her a huge following. She has been hailed as “the pre-eminent Bach pianist of our time” (The Guardian) and “the pianist who will define Bach performance on the piano for years to come” (Stereophile). Her discography includes CDs of Beethoven, Schumann, Messiaen, Ravel, Chopin, Couperin, Rameau and Chabrier.

Angela Hewitt appears as recitalist and soloist at the major concert halls around the world including the Lucerne Piano Festival, as well as major festivals such as Edinburgh, Prague, Osaka, Hong Kong, Schleswig-Holstein and Oslo. She regularly gives recitals in London’s Royal Festival Hall and is also a regular guest at the Wigmore Hall.

Born into a musical family, Angela Hewitt began her piano studies aged three, performing in public at four and a year later winning her first scholarship. She then went on to learn with French pianist, Jean-Paul Sévilla. In 1985 she won the Toronto International Bach Piano Competition.

Angela Hewitt was named ‘Artist of the Year’ in the 2006 Gramophone Awards. She was made an Officer of the Order of Canada in 2000, and was awarded an OBE in the Queen’s Birthday Honours in 2006. She has homes in London, Canada and Umbria, Italy, where she invites international musicians each summer to take part in her own Trasimeno Music Festival.

All videos related to Angela Hewitt (1) 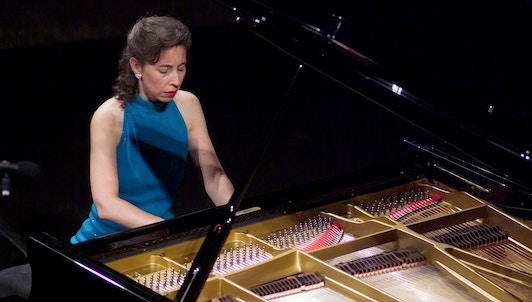