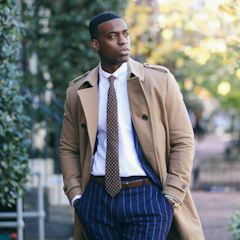 A recent graduate of Washington National Opera's Domingo-Cafritz Young Artist Program, a program of the John F. Kennedy Center for the Performing Arts, Soloman Howard garners high praise from the press for his vivid performances on the great opera and concert stages of the world. The bass' voice is described as "sonorous" by The New York Times, "superhuman" by The Denver Post, and "a triumph" by The Guardian. Soloman Howard’s 2016-17 season includes his return to the Metropolitan Opera in performances of Aida conducted by Marco Armiliato and Daniele Rustioni. Highlights also feature performance of Beethoven’s Ninth Symphony with Christoph Eschenbach and the National Symphony Orchestra and with Gustavo Dudamel conducting the Simón Bolívar Symphony Orchestra in debut appearances on many of Europe’s most famous stages including El Palau de la Música Catalana in Barcelona, Elbphilharmonie in Hamburg, and the Musikverein in Vienna.

Last year Soloman Howard joined Gustavo Dudamel, the Simón Bolívar Symphony Orchestra, and Los Angeles Philharmonic on tour celebrating the commercial CD release of Beethoven's Ninth Symphony that the bass recorded with Mr. Dudamel in Caracas. Mr. Howard made a role debut as Fafner in Das Rheingold and Siegfried in Washington National Opera's epic presentation of Der Ring des Nibelungen directed by Artistic Director Francesca Zambello and conducted by Music Director Philippe Auguin. Other performances of the season included a debut at Santa Fe Opera as Commendatore in Don Giovanni conducted by John Nelson, a company debut with l'Opéra national de Bordeaux as Jacopo Fiesco in a new production of Simon Boccanegra conducted by Paul Daniel, and Banco in Macbeth with Kentucky Opera.

Highlights of the recent past include performances of Aida at the Metropolitan Opera, La traviata at the Los Angeles Opera under the baton of Music Director James Conlon, The Magic Flute and Macbeth at the Glimmerglass Festival, and the title role of Approaching Ali at North Carolina Opera and the Washington National Opera. For the Washington National Opera, the bass also bowed in productions of The Magic Flute, Show Boat, Don Giovanni, and Nabucco and created the roles of Frederick Douglass and Martin Luther King, Jr. in the world premiere of the revised edition of Appomattox composed by Philip Glass in a production by Tazwell Thompson. The Anti-Defamation League presented Soloman Howard with their "Making a Difference Award" for raising awareness of voting rights though his performances of Appomattox at the Kennedy Center and for bringing opera into the larger community.

Soloman Howard is a graduate of the Manhattan School of Music and Morgan State University.