Trained in William Christie's Jardin des Voix, Bulgarian soprano Sonya Yoncheva has become one of the most celebrated and exciting performers of her generation. She is particularly acclaimed for her interpretations of great lyric opera roles: after her performance in La Traviata in Berlin in December of 2015 Die Welt declared her "the finest Violetta since Maria Callas." In February of 2017 she released the Sony Classical Album Handel, featuring selected airs written by the beloved baroque composer for his strong and versatile operatic heroines.

The soprano is joined by conductor Alessandro de Marchi and his orchestra Academia Montis Regalis (both also featured on Yoncheva's album Handel) for a concert of opera airs by three baroque masters: Handel, Rameau, and Purcell. From Handel's Giulio Cesare in Egitto to Rameau's Les Indes galantes to Purcell's Dido and Aeneas, audiences are taken on a sweeping musical journey sure to delight! 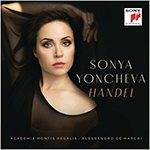