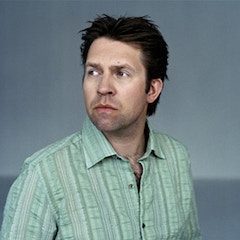 The Wall Street Journal has called Leif Ove Andsnes, “one of the most gifted musicians of his generation,” while the New York Times has described him as “a pianist of magisterial elegance, power and insight.” With his commanding technique and searching interpretations, the celebrated Norwegian pianist has won worldwide acclaim. As well as giving recitals and playing concertos each season in the world’s leading concert halls and with the foremost orchestras, he is also an active recording artist, as well as an avid chamber musician who has joined select colleagues each summer at Norway’s Risør Festival of Chamber Music. He will serve as Music Director of the 2012 Ojai Music Festival.

Among the many highlights of Leif Ove Andsnes’ 2010-11 season are two important residencies: As Artist in Residence with the Berlin Philharmonic Orchestra, he performs five diverse programs including chamber music, Brahms’s Piano Concerto No. 2 with conductor Bernard Haitink, and a solo recital. He also serves as Artist in Residence with his hometown orchestra, the Bergen Philharmonic, where he performs three programs. A European tour with the London Philharmonic and Vladimir Jurowski featured performances of Brahms’s Second Piano Concerto in London, Spain, and Germany. He brought his tenure as co-artistic director of the Risør Festival to a festive conclusion with a fall tour that included concerts in Brussels, London, and New York’s Carnegie Hall.

Andsnes’s concerto performances this season included Mozart’s Concerto No. 24 with the Dresden Statskapelle and Herbert Blomstedt, and a February tour with the Concertgebouw Orchestra under Mariss Jansons, playing the same Mozart concerto and Brahms’s second in Amsterdam, Hamburg, Copenhagen, Oslo, Stockholm, Luxembourg, and Paris. He also performed Brahms’s Concerto No. 2 with the Chicago Symphony Orchestra, and with the Orchestre de Paris under Paavo Järvi in Paris and Vienna. At the end of March, Andsnes begins an extensive recital tour with performances in Copenhagen, Bergen, Boston, Chicago, and New York’s Carnegie Hall, before returning to Europe for further performances in Rome, St. Petersburg, Berlin, Madrid, Vienna, Hamburg, Geneva, and other cities. In the fall, EMI Classics released a recording featuring Andsnes performing Rachmaninov’s Piano Concertos Nos. 3 and 4 with Antonio Pappano and the London Symphony Orchestra. Also with EMI Classics, Andsnes has recorded an album of Schumann’s complete Piano Trios with violinist Christian Tetzlaff and his sister, cellist Tanja Tetzlaff, which is released in April 2011.

Andsnes devoted much of his 2009-2010 season to “Pictures Reframed,” a major multi-media project with South African artist Robin Rhode. The culmination of years of planning, the project was toured extensively throughout Europe and North America to great acclaim. At the heart of this collaborative work was Mussorgsky’s Pictures at an Exhibition, which Andsnes played while Rhode’s illustrations and films, inspired by the piece, were projected onto a specially designed stage set. Schumann’s Kinderszenen and a new work by Thomas Larcher that was written for the project in collaboration with Rhode were also integral to the performance. Norway’s StatOilHydro was the event’s commissioning sponsor, and Norwegian TV documented the project on film. EMI Classics released it on both CD and DVD, including a deluxe exhibition/catalogue-style hardback book with a wide selection of images from the creation and final performance version of the project. The latter won a 2010 ECHO Klassik Prize.

Other highlights for last season included performances of Rachmaninov’s Piano Concerto No. 4 with the Royal Scottish National Orchestra and Stéphane Denève, the Gothenburg Symphony Orchestra and Gustavo Dudamel, and both the Academy of Santa Cecilia and the London Symphony Orchestra with Antonio Pappano. He also gave the world-premiere performance with the Norwegian Chamber Orchestra of a new work written by Danish composer Bent Sørensen, performed Mozart’s Piano Concerto No. 23, K488, with the New York Philharmonic and Alan Gilbert, and also with the Vienna Philharmonic and Nikolaus Harnoncourt at the famous Salzburg Mozartwoche. He also recorded music by Janacek and Beethoven live at Apple’s store on Manhattan’s Upper West Side, and the recording is available exclusively as a digital release on iTunes.

In March 2011, Leif Ove Andsnes signed a new exclusive contract with Sony Classical to record the full cycle of Beethoven’s piano concertos with the Mahler Chamber Orchestra over a period of three years. Each performance will be recorded live in concert in Prague with Andsnes directing from the piano. The project culminates in the 2014 – 15 season when Andsnes and the Mahler Chamber Orchestra will re-unite for major residencies in North America, Europe and Asia performing the complete Beethoven cycle.

As an EMI Classics artist for many years Andsnes has recorded more than 30 discs spanning repertoire from Bach to the present day. He has been nominated for seven Grammys and awarded many international prizes, including five Gramophone Awards. He has received Norway’s most distinguished honor, Commander of the Royal Norwegian Order of St. Olav as well as the prestigious Peer Gynt Prize, awarded by members of parliament to honor prominent Norwegians for their achievements in politics, sports and culture. Andsnes has also received the Royal Philharmonic Society’s Instrumentalist Award and the Gilmore Artist Award. Saluting his many achievements, Vanity Fair named Andsnes one of the “Best of the Best” in 2005.

Andsnes was born in Karmøy, Norway in 1970, and studied at the Bergen Music Conservatory under the renowned Czech professor Jiři Hlinka. Over the past decade, he has also received invaluable advice from the Belgian piano teacher Jacques de Tiège, who like Hlinka, has greatly influenced his style and philosophy of playing. Andsnes cites Dinu Lipatti, Arturo Benedetti Michelangeli, Sviatoslav Richter, and Géza Anda among the pianists who have most inspired him. Andsnes currently lives in Copenhagen and Bergen, and also spends much time at his mountain home in Norway’s western Hardanger area. He is a Professor at the Norwegian Academy of Music in Oslo, a Visiting Professor at the Royal Music Conservatory of Copenhagen, and a member of the Royal Swedish Academy of Music. In June 2010, he achieved one of his proudest accomplishments to date: he became a father for the first time.