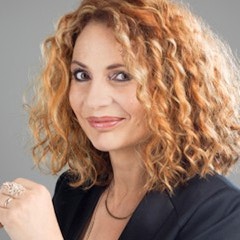 Joanna MacGregor is one of the world's most innovative musicians, appearing as a concert pianist, curator and collaborator. Currently Head of Piano at the Royal Academy of Music, Joanna MacGregor was Artistic Director of the Bath International Music Festival 2006-2012, and curated the multi-arts Deloitte Ignite Festival at the Royal Opera House in 2010, as well as Aventures, an orchestral series for Luxembourg Philharmonie, 2012-13. As a solo artist Joanna has performed in over seventy countries and appeared with many of the world's leading orchestras, with such eminent conductors as Pierre Boulez, Sir Colin Davis, Valery Gergiev, Sir Simon Rattle and Michael Tilson Thomas, and has premiered many landmark compositions ranging from Sir Harrison Birtwistle and Django Bates to John Adams and James MacMillan. She made three appearances at the 2012 BBC Proms, two of them televised (including Hugh Wood's Piano Concerto and Messiaen's Turangalîla), and made her debut at the Mostly Mozart Festival in Lincoln Center, New York in August 2012.

Known for her interpretations of Bach, in April 2013 she was invited by Sir John Eliot Gardner to perform the Goldberg Variations at the Royal Albert Hall, broadcast live. She made her debut at Leipzig Gewandhaus in June, and returns this December to perform Britten's Piano Concerto for his centenary celebrations, as well as Charles Ives in Salzburg's Dialog Festival.

Joanna MacGregor made her conducting debut in 2002 and has solo-directed concerts with the Royal Philharmonic Orchestra, Liverpool Philharmonic, Manchester Camerata and the Hallé, and has enjoyed a close artistic partnership with Britten Sinfonia for more than fifteen years. Amongst the many and varied artists with whom she has collaborated are jazz artist Moses Molelekwa, pop artist and tabla player Talvin Singh, Brian Eno, folk artist Kathryn Tickell, jazz saxophonist Andy Sheppard and Arabic singer and oud virtuoso Dhafer Youssef.

Multimedia is of great interest to Joanna MacGregor, and in 2003 she toured China with Crossborder; created with Jin Xing's Contemporary Dance Theatre of Shanghai, it combined Chinese traditional music with computer technology and film. For Bath International Music Festival 2007 she curated the installation On The Edge of Life, a multimedia collaboration between paediatricians, artists and musicians, examining premature birth. This became an annual event, and in 2008 the series examined the impact of homelessness and in 2009 child human rights through the prism of fairytales with cultural historian Marina Warner. Deloitte Ignite 2010 at the Royal Opera House included many new art commissions, including a year-long installation by the remarkable artist Alice Anderson.

As a recording artist Joanna MacGregor is a veteran of over 30 solo recordings, ranging from Bach, Scarlatti, Ravel and Debussy, to jazz and John Cage. Her own record label SoundCircus was founded in 1998 and has released many highly successful recordings, including the Mercury Prize-nominated Play and Neural Circuits, with Nitin Sawhney. Other releases include Sidewalk Dances – music by the New York street musician Moondog – and Deep River, music inspired by the Deep South, with saxophonist Andy Sheppard. Live in Buenos Aires, Bach's Goldberg Variations (recorded at the Mozarteum in Salzburg) and a four-CD Messiaen set were released in 2010 by Warner Classical and Jazz, now in partnership with SoundCircus label. Seven further double CDs were released in June 2011.

Joanna MacGregor is Professor of Performance at Liverpool Hope University; she has received Honorary Fellowships from the Royal Academy of Music, Trinity College of Music and Murray Edwards College, Cambridge, as well as Honorary Doctorates from Bath University, Bath Spa University and the Open University. From 1997-2000 she was Professor of Music at Gresham College, London where she gave a series of public lectures. She was the subject of a South Bank show in 2002; and her ongoing series of music books, PianoWorld has been hailed as 'a new series for the Millenium'.

Joanna MacGregor was awarded an OBE in 2012, became a Professor of the University of London in 2013 and was recently appointed Artistic Director of the Dartington International Summer School. 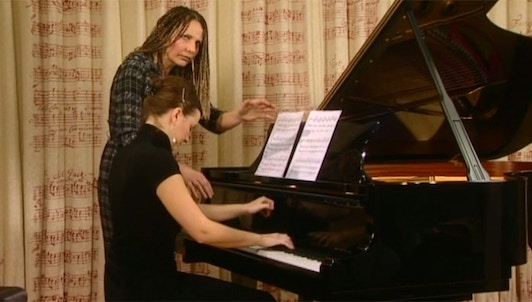