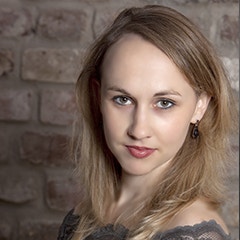 Born into a Scottish-Icelandic family, soprano Hannah Morrison grew up in Holland where she studied singing and piano from 1998 to 2003. After receiving her diploma she moved on to the Hochschule für Musik und Tanz Cologne and at the beginning of 2009 she continued her studies with Professor Barbara Schlick, finishing with a concert examination. During this period she also completed a "Masters in Music in Performance" at the London Guildhall School of Music and Drama under professor Rudolf Piernay.

As a performing singer she works closely with Sir John Eliot Gardiner, under whose direction she made her debut in Mozart's arrangement of Handel's Alexander's Feast at the Salzburg Festival in 2013. Within the same year she made guest appearances in the concert halls of Barcelona, Cologne, London (recorded by the BBC), Lucerne, Paris and Pisa, at the Bachfest Leipzig, as well as at the Aldeburgh Festival (Bach's St John Passion and Mass in B minor). A special highlight this year was her performance at the BBC Proms (Bach's Ascension Oratorio and Easter Oratorio). In the 2013/2014 season she will again sing under Gardiner's direction together with the Gewandhausorchester in Leipzig in Schumann's Paradise and the Peri as well as Brahms' A German Requiem in the following season.

She regularly makes guest appearances with Les Arts Florissants under the direction of Paul Agnew and William Christie. The CD "Harmonia Sacra" with William Christie was released on Virgin Classics in 2007. Hannah Morrison's most recent tour with Les Arts Florissants took her to the concert halls of Madrid, Paris and London. In the 2013/2014 season she will make appearances at numerous venues, among them the Palais Garnier, where she performed together with the Ballet de l'Opéra de Paris. In 2014 she sang the Monterverdi's Sixth Book of Madrigals in Caen, Versailles, Anvers and Paris.

As a guest at the 2013 Brühler Schlosskonzerte, together with Capella Augustina and Andreas Spering, Hannah Morrison gave a performance of Haydn's La vera costanza which was broadcast throughout Europe.

She enjoyed a successful tour with the Bach Collegium Japan and Masaaki Suzuki in December 2012, and has been invited back for Bach's St. Matthew Passion in April and Handel's Messiah in December 2014.

Further engagements in this season include concerts with Philippe Pierlot/Ricercar Ensemble in December 2013 in Bozar in Brussels and deSingel in Antwerp (Bach Christmas Cantatas), with Philippe Herreweghe/Orchestre des Champs Elysées in March 2014 (Haydn Die Schöpfung), with Hans-Christoph Rademann/Dresdner Kammerchor in June 2014 (Bach's Mass in B minor), with Christoph Spering at the Bachfest Leipzig 2014 (C. Ph. E. Bach Die Israeliten in der Wüste) and with Stefan Blunier/Beethoven Orchester Bonn in March 2015 (Mozart concert arias).