Jean-Nicolas Bouilly’s libretto Leonore, ou L’Amour Conjugal, set to music by Pierre Gaveaux, first premiered in Paris in 1798. This source material soon spread throughout Europe with two Italian-language settings—one with an 1804 premiere in Dresden and another in Padua in 1805—before a German version arrived at Vienna's Theater an der Wien in 1805. Billed as Fidelio oder die eheliche Liebe (Fidelio, or Married Love), it was the work of a first-time opera composer: one Ludwig van Beethoven.

Alongside his prolific and revolutionary output in so many other genres—the piano sonata and concerto, the string quartet, and perhaps most famously, the symphony—Fidelio would remain Beethoven's lone (but indispensable!) contribution to the operatic genre. It was no easy feat, requiring over a decade of labor and three significant revisions before the 1814 version most commonly performed today.

It may not be as widely known today as some of Beethoven’s other work, but Fidelio is fresh and exciting from both a musical and narrative standpoint: the title character is actually Leonore, disguised as a man to free her husband Florestan from sinister political machinations. The famous overture, as well as many of the arias—like the one sung by a group of prisoners briefly tasting freedom (O welche Lust—“O what a joy”)—are among the most stirring pieces Beethoven ever wrote! 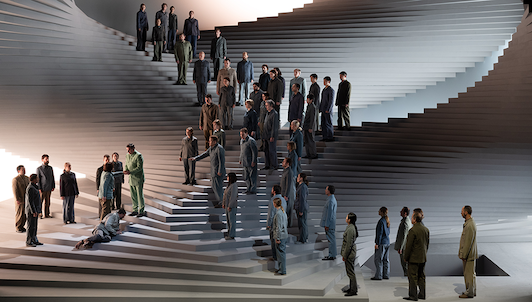