A story of the waltz and the Strauss family

At the beginning of the 19th century, Europe was set alight by a shocking new dance craze. It was accompanied by popular music that was played, whistled and hummed all around the globe. It was called the waltz and its story is inseparable from the story of one family. A family named Strauss.

This docu-drama, entertainingly presented by Lesley Garrett, tells the story of the Waltz and the Strauss family. The Strauss family kept Vienna and much of the rest of the world dancing for over a hundred years. However the father and son composers, who both held the public title of "The Waltz King," were uneasy rivals in their private life.

Johann Strauss Senior, born in 1804, was a hugely popular composer, at home and abroad, who transformed the waltz from a simple dance into a Viennese cultural phenomenon. But despite the great acclaim he enjoyed in his lifetime, his reputation has been entirely eclipsed by his eldest son Johann Strauss Junior took the waltz to a whole new musical level. He wrote some of the most popular tunes ever, including The Blue Danube, and ended up a household name around the globe. However although Strauss Junior travelled further, composed greater music and was altogether privately and publicly more successful, in his own mind, he never quite escaped the shadow of his father.

Lesley Garrett explores the origins of the waltz – the music, the dance steps, the ballrooms, the costumes and at the same time narrates the drama of the two great Waltz composers, a bitter conflict between a father and a son. This rich and compelling story is lavishly illustrated with the music and dancing of the time, recreated in Vienna's sumptuous Hofburg Palace. 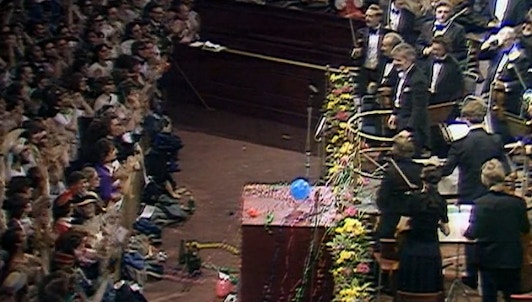 Viennese Night at the BBC Proms