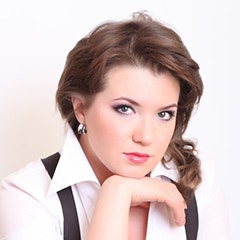 Graduated from the Petrozavodsk Glazunov State Conservatory studying under Prof. Viktoria Gladchenko (2009). She was among the winners of Young Talents of Russia National Competition (2008), the Nadezhda Obukhova Russian National Competition of Young Singers in Lipetsk (2010, third prize), the 26th International Sobinov Memorial Festival in Saratov (2013, first prize), and the 9th International Rimsky-Korsakov Competition of Young Opera Singers in Tikhvin (2015, first prize). She received a diploma at the International Mezzo-Soprano Competition in Memoriam of Fedora Barbieri in Saint Petersburg. In 2006 she sang Olga (Eugene Onegin) at the State Philharmonia of Karelia. Since 2008 she has been a soloist with the Mariinsky Theatre Academy of Young Opera Singers. She debuted on the stage of the Mariinsky Theatre in 2009 as Cherubino in (Le Nozze di Figaro). With the theatre’s opera troupe she has been on tour to Austria, Germany, Finland, Sweden, the UK, France, Japan, Italy, Spain, and Switzerland. She participated in the Edinburgh International Festival on three occasions.