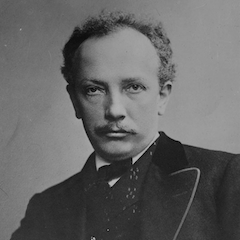 Richard Strauss began his musical education with his father who was an excellent first horn at the Munich opera house. Accustomed to the orchestra from a very early age, Strauss rapidly became a great conductor who was admired and sought after throughout Germany. Heinrich Von Bülow chose him as his successor in 1885 to conduct the Meiningen Orchesta and then the Berlin Opera. The posts he held in Munich and Vienna or at the Weimar court along with his first symphonic poems were the premises of his first great work, Salome (1905), a controversial work of luxuriant orchestration and sensual, volcanic writing which was banned in Britain until 1910.

Often working with the famous Austrian Hugo von Hofmannsthal who wrote the librettos, Richard Strauss’ operas caused a sensation and he was venerated throughout Germany. Claude Debussy saw in him, “one of the most authoritative geniuses of our era” and in 1907, Romain Rolland wrote to him, “ [...] your strength is for me the greatest in all of contemporary musical Europe.” Under the third Reich, he accepted the post of president of the Reichsmusikammer until he was dismissed in 1935 for having defended the Jewish writer Stefan Zweig, the librettist of The Silent Woman.

Until 1915, Richard Strauss astonished musical spheres by the extraordinary modernism of his writing. However, during the last thirty years of his life, he often disappointed his admirers with more conventional and classical works. Following in Johannes Brahms footsteps, Strauss’ compositions are powerfully lyrical with sumptuous orchestral range. The last Romantic, he put great fervour into the composition of The Four Last Songs in 1949 as the musical world was treading the path of modernity. As proof of this, Pierre Boulez’s Piano Notations were composed that very same year.