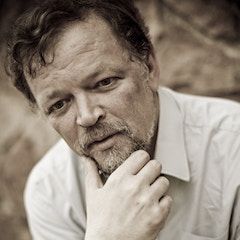 At six years of age Demidenko went to the Gnessin School of Music where he studied with Anna Kantor, following this by studies at the Moscow Conservatory with Dmitri Bashkirov. He was a finalist at the 1976 Montreal and 1978 Tchaikovsky Competitions. His British debut was made in 1985 with the Moscow Radio Symphony Orchestra. Demidenko has been resident in the United Kingdom since 1990, obtaining a teaching contract at the Menuhin School of Music in the year of his arrival and also becoming a visiting professor at the University of Surrey. He has worked with many of the major orchestras of the world including the London Philharmonic, the London Symphony, the Royal Philharmonic and the St Petersburg Philharmonic with conductors Sir Roger Norrington, Vladimir Fedoseyev, Yuri Temirkanov and Sir Andrew Davis. Demidenko has played in Australia and New Zealand, Canada, the Far East and Europe and made his New York debut at the Frick Collection in 2001. He did, however, appear in New York in 1986, playing Gershwin's Rhapsody in Blue at the celebration of the centennial of the Statue of Liberty. This occasion, when he was joined by Tomita and his synthesized Plasma Symphony Orchestra, was recorded by RCA Victor. He also appears annually at the Herkulessaal in Munich. At London's Wigmore Hall Demidenko gave a series of six Piano Masterworks programmes in 1993, a Chopin series in 1996 and a three-part series in 1997 entitled A Romantic Voyage. Among his other London engagements have been three recitals in the Harrods International Piano Series at the Royal Festival Hall, and two appearances in the Barbican Hall in 1999.

Nikolai Demidenko's passionate pianism means that he is in demand worldwide.

Frequent London recitals have included the Great Performers series at the Barbican, the International Piano Series at Southbank Centre and recently the London Pianoforte Series at the Wigmore Hall - a Chopin recital which was featured as the only live performance in BBC Radio 3's Chopin Experience, a weekend celebration of his complete works.

He is renowned for his authoritative performances of the Russian concerto repertoire such as Prokofiev, Rachmaninov and Tchaikovsky and has worked with many conductors and orchestras throughout the world. He has a flourishing relationship with the St Petersburg Philharmonic and Yuri Temirkanov, with whom he performs regularly. He also enjoys a fruitful collaboration with several Russian artists who have made their homes in London; a cello and piano duo with Leonid Gorokhov; piano quartets with the exciting new Hermitage String Trio; and a two-piano partnership with Dmitri Alexeev, who likewise studied at the Moscow Conservatoire under Dmitri Bashkirov.

His repertoire is wide-ranging, including Bach, Clementi, Mendelssohn, Mozart, Mussorgsky and Scarlatti. He has a special affinity with the works of Chopin and travels frequently to Poland, most recently to Warsaw to perform at the Chopin and His Europe Festival and Chopin Birthday celebration concert on 27.2.2010. Other festival appearances include venues in Aldeburgh, Dubrovnik, Eilat, New York, Oslo and Singapore.

Demidenko is prolific in the recording studio. He values recordings and has said, 'Recordings are an essential part of my life, which I use partly as a reference. The way we play is a reflection of our life, and we can't play like pianists in the 1930s because it's a different life… You take encouragement from previous ages, but then you have to make your own decisions.' Demidenko has made a few discs for Sanctus (Schumann) and Conifer (Scriabin), but the bulk of his recorded output has been made for Hyperion. Nineteenth-century and Russian composers feature prominently, including Chopin, Schumann, Liszt, Medtner, Mussorgsky, Prokofiev, Rachmaninov and Scriabin. He has made an appearance as soloist in the Hyperion Romantic Piano Concerto Series with works by Weber and Medtner (his disc of this composer's Piano Concertos Nos 2 and 3 won a Gramophone Award in 1992), as well as recording the complete concertos of Prokofiev. One of his most successful concerto discs is of Tchaikovsky's Piano Concerto No. 1 Op. 23, where Demidenko gives a musical and sensitive reading of this work in the style of Vassily Sapellnikov, a pianist who played it with the composer. Like Sapellnikov's recording, Demidenko's is a performance that makes far more musical sense than many of the violent and vulgar versions available on compact disc. Hyperion has also released a two-disc set of Demidenko's live Wigmore Hall performances from the adventurous and interesting 1993 Piano Masterworks series including works by Voríšek, Kalkbrenner, Gubaidulina, and arrangements of Beethoven by Liszt, and of Buxtehude by Prokofiev. A disc of Busoni transcriptions of Bach recorded in 1991 was a critical success, and a second volume followed in 2001. These show Demidenko at his best, his obvious love and respect for these works being communicated in studied and committed performances. Another feature contributing to the success of the later recording is the fact that Demidenko uses a Fazioli piano from which he draws huge, golden sonorities. Demidenko has a high opinion of Busoni as a pianist: 'Casting back over the years of recordings I would say that the best pianist I've ever heard in my life is Ferruccio Busoni. I've all his recordings ever released, and everything is magical. You can't imagine it is possible from the way the piano sounds – from the simplest phrase up to the entire complexity.”

For Hyperion Records Nikolai Demidenko has recorded albums of Bach–Busoni, Chopin, Clementi, Liszt, Medtner, Mussorgsky, Prokofiev, Rachmaninov, Schubert and Schumann and concertos by Chopin, Medtner (which won a Gramophone Award), Scriabin, Tchaikovsky and Weber as well as the complete Prokofiev Concertos with the London Philharmonic Orchestra conducted by Alexander Lazarev. For the Munich-based AGPL label he has recorded Beethoven's Hammerklavier Sonata, a collection of Scarlatti sonatas and a Chopin CD which won the Preis der deutschen Schallplattenkritik. Autumn 2008 saw the release of a new Chopin CD, including his first recording of the Twenty-four Preludes, for Onyx Classics. This CD won the MIDEM 2010 Special Chopin Award for a new recording.

In 2014 he was awarded an honorary doctorate from the University of Surrey in recognition of his outstanding contribution to the field of Music and the University.

All videos related to Nikolaï Demidenko (2) 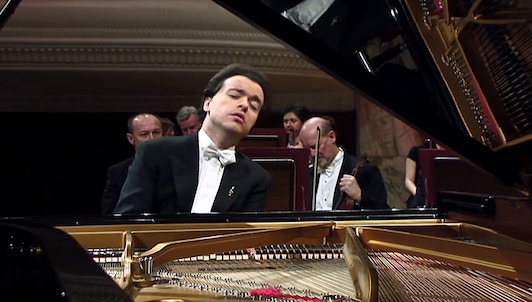 With Antoni Wit and the Warsaw Philharmonic Orc...