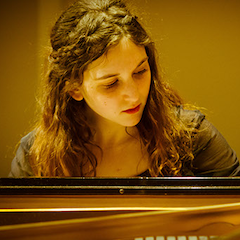 Hungarian-American pianist Julia Hamos has performed internationally as a soloist and chamber musician, notably in Carnegie Hall, Wigmore Hall, the Kennedy Center, the Liszt Academy in Budapest, and throughout Europe. She has worked with artists including András Schiff, Leon Fleisher, Ferenc Rados, Jonathan Biss, Yefim Bronfman, Sergei Babayan and members of the Orion and Takács string quartets. She has given recitals and chamber music performances at the Trasimeno Music Festival in Italy, at Open Chamber Music of the IMS Prussia Cove, at the Four Seasons Chamber Music Festival, at the Kneisel Hall Festival, at the Ravinia Steans Institute in 2015 and at the Verbier Festival Academy in 2016.

She was a finalist in the Yamaha Scholarship Competition in 2011 and the winner of the Sterndale Bennett Prize in 2012 at the Royal Academy of Music, given for the best performance of Romantic works. In May 2014 she won the International Virtuoso Competition’s (NYC) Grand Prize and gave a prizewinner concert at Merkin Hall, Lincoln Center, that September. She also won the Mannes College Fidelman Prize in 2015 for the pianist who best interprets contemporary works. She has collaborated with the Martha Graham Dance Company, the New English Ballet Theatre, and The New School’s Drama division.

In 2017 she will perform in venues including Weill Hall at Carnegie Hall, the United Nations Center in New York, Wigmore Hall in London, and in Switzerland and Germany. Julia is a graduate of the Royal Academy of Music, where she studied with Christopher Elton. She now studies at the Mannes College of Music with Richard Goode.