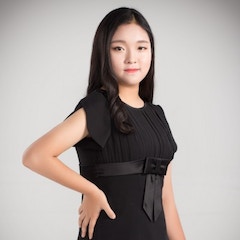 Jiwon Yang debuted in January 2012 when she was barely 9 years old with a solo recital at Mozart Hall and Kumho Art Hall in Seoul. At just 15 years of age, Jiwon has won so many international awards, including First Prize at Dong-A competition, Second Prize at the Liszt competition (2017), Second Prize at the 3rd Festival & Competition Astana Piano Passion in Kazakhstan and Fourth Prize at the 1st Zhuhai Mozart Competition for Young Musicians in China (2015). She had a solo recital at the Cultural Center of the Philippines in February 2014. In April 2014 she performed for the Philippines Chopin Society Invitation Recital. Recently she performed a solo recital at the Kumho Art Hall in November of 2016. Jiwon is currently studying with Mrs. Se-Hee Kim at the Seoul National University. She has also participated in master classes with Ekaterina Mechetina, Gerrit Zitterbart, Hye-Kyoung Seo. Jiwon Yang performed with Astana philharmonic & Salzburg Chamber Soloist in 2015.