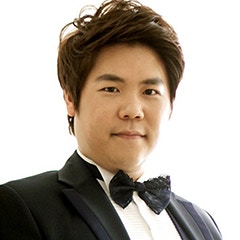 Graduate of the Korean National University of Arts in Seoul (2007). He continued his studies at the Hamburg University of Music and Theatre under Prof. Carolyn James. In 2010 he won second prize in the European Opera Singing Competition Debut in Weikersheim (Germany). In 2011 he won the International Opera Singing Competition in Marmande (France) and the Cologne International Music Competition. In 2012 he took second prize and the audience favourite award at the 61st ARD International Music Competition in Munich. Since 2006 he has sung various parts in productions of the Korean National University of Arts, the Robert Schumann Music College in Dusseldorf, and the Hamburg University of Music and Theatre. As a member of the Kassel State Theatre in the 2013-2014 season, he performed the part of Papageno (Die Zauberflöte) and Falke (Die Fledermaus) among others.