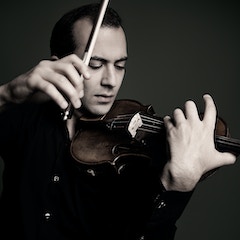 Born in Yerevan and trained at the Moscow Conservatory studying under Prof. Eduard Grach (2000-2006) and at the Royal College of Music in London under Prof. Itzhakh Rashkovsky (2006-2008). He is a prize winner of many international competitions, including the 12th International Tchaikovsky Competition (2002, fourth prize), the Marguerite Long-Jacques Thibaud Competition in Sion (Switzerland, 2004, first prize and three special prizes), the Isang Yun Competition in Tongyeong (South Korea, 2007, first prize and audience favourite award), and the George Enescu Competition in Bucharest (2011, second prize). He performs in the world’s major concert venues as well as participating in the Verbier Festival, the Stars on Baikal Festival, and the Arts Square Festival among many others. In 2010 his solo album Opera Fantasies was released by the American Delos label. Since 2002 he has been a soloist for the Moscow Philharmonic and since 2008 has taught at the Moscow Conservatory.