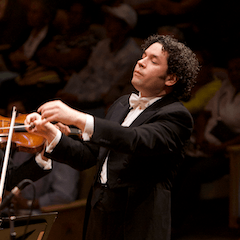 As an internationally renowned symphonic and operatic conductor, Gustavo Dudamel is motivated by a profound belief in music's power to unite and inspire. Currently serving as Music Director of the Simón Bolívar Symphony Orchestra of Venezuela and Music & Artistic Director of the Los Angeles Philharmonic, the impact of his leadership extends from the greatest concert stages to classrooms, cinemas and innovative digital platforms around the world. Dudamel also appears as guest conductor with some of the world’s most famous musical institutions: in 2017/18, he tours Europe with the Berlin Philharmonic, and takes the Vienna Philharmonic on a tour of the Americas, with concerts in New York’s Carnegie Hall, Mexico City’s Bellas Artes, Bogota’s Teatro Mayor, Teatro Municipal in Santiago de Chile, as well as the famed Teatro Colon in Buenos Aires. This season also sees Dudamel’s return to the opera house, conducting a new production of Puccini’s La Bohème at the Opéra National de Paris.

Now entering his ninth season as Music & Artistic Director, the Los Angeles Philharmonic has dramatically expanded the scope of its community outreach programs, including most notably his creation of Youth Orchestra Los Angeles (YOLA), influenced by the philosophy of Venezuela’s admired El Sistema, which encourages social development through music. With YOLA and diverse local educational initiatives, Dudamel brings music to children in under-served communities of Los Angeles. These programs have in turn inspired similar efforts throughout the United States, as well as in Sweden (Hammarkullen), Scotland (Raploch) and around the world.

For the Los Angeles Philharmonic under Dudamel, remarkable is not only the breadth of audiences reached, but also the depth of programming performed. LA Phil programs continue to represent the best and boldest in new music, including numerous premieres and commissions by composers such as John Adams, Philip Glass, Bryce Dessner, Arvo Pärt, Sofia Gubaidulina, Esa-Pekka Salonen and Kaija Saariaho. A series of concerts focusing on Mozart's late works kicks off the season, as well as Festival CDMX, featuring the music and artists of Mexico. The Spring of 2018 pays tribute to the 100th birthday of Leonard Bernstein with performances of Mass and Chichester Psalms and features a Schumann festival, including a new production of Das Paradies und die Peri, staged by Peter Sellars. In early 2018, the LA Phil also tours the United States and to Europe.

Dudamel's commitment to young people and music is fuelled by his own transformative experience in Venezuela's El Sistema, a program initiated by José Antonio Abreu in 1975. In addition to his ongoing commitment to the children, teachers, and orchestras of El Sistema in Venezuela, Dudamel devotes much of his time to education and programs promoting social change through art. Dudamel has appeared at the United Nations and the White House to raise awareness for the role of music education in social development. Further afield, he has worked on numerous occasions with El Sistema Japan and with the Sendai Youth Philharmonic in the wake of the 2011 tsunami. He actively supports projects such as Big Noise in Scotland, Vienna's Superar program, SerHacer in Boston, and El Sistema Sweden, with whom he initiated an international “Orchestra of the Future” comprising young people from five continents, to perform together on the occasion of the 2017 Nobel Prize Concert.

Recordings, broadcasts and digital innovations are also fundamental to Dudamel's passionate advocacy for universal access to music. Dudamel's discography includes landmark recordings of John Adams' Gospel According to the Other Mary (commissioned and performed by the Los Angeles Philharmonic), the sound track to the motion picture Libertador, for which Dudamel also composed the score, Mahler Symphonies 5 and 7 with the Simón Bolívar Symphony Orchestra, and Mahler 9 with the Los Angeles Philharmonic. A unique performance of Mahler's “Symphony of a Thousand” featuring the combined forces of the LA Phil and the Bolívars and over 1000 choristers and children from across Venezuela was captured for DVD/Blu-Ray and broadcast live to cinemas in the US and Canada. A film documentary, Let the Children Play, featuring Dudamel, was also shown in over 500 movie theaters nationwide. A special charity LP release of Mendelssohn's “Scottish” Symphony with the Vienna Philharmonic raised funds for music education projects in Latin America, and children from Vienna's El Sistema-inspired Superar program participated in his most recent Deutsche Grammophon release of Mussorgsky's Pictures at an Exhibition, also with the Vienna Philharmonic. Dudamel has independently produced an all-Wagner recording available exclusively for download, a complete set of Beethoven symphonies for digital learning, and a broadcast of two Stravinsky ballets with the Simón Bolívar Symphony Orchestra in cooperation with the Berlin Philharmonic's Digital Concert Hall.

Gustavo Dudamel has been featured three times on CBS’s 60 Minutes and was subject of a PBS special, Dudamel: Conducting a Life. He appeared on Sesame Street with Elmo, with Charlie Rose, Conan O'Brian, and on The Late Show with Stephen Colbert. Most recently, Gustavo had a cameo role in Amazon Studio’s award-winning series, Mozart in the Jungle, guest-conducted on the soundtrack for Star Wars: The Force Awakens and, together with members of YOLA, became the first classical musician to participate in the Superbowl Half Time Show, appearing alongside pop stars Coldplay, Beyoncé and Bruno Mars. In 2017, he was the youngest-ever conductor to lead the Vienna Philharmonic's famous New Year's Day Concert, watched annually by over 60 million people in 90 countries.

Gustavo Dudamel is one of the most decorated conductors of his generation. He received the Americas Society Cultural Achievement Award in 2016, and the 2014 Leonard Bernstein Lifetime Achievement Award for the Elevation of Music in Society from the Longy School of Music. He was named Musical America’s 2013 Musician of the Year, one of the highest honors in the classical music industry, and was voted into the Gramophone Hall of Fame. In October of 2011, he was named Gramophone Artist of the Year, and in May of the same year, was inducted into the Royal Swedish Academy of Music in consideration of his “eminent merits in the musical art.” The previous year, he received the Eugene McDermott Award in the Arts at MIT. Dudamel was inducted into l’Ordre des Arts et des Lettres as a Chevalier in Paris in 2009, and received an honorary doctorate from the Universidad Centroccidental Lisandro Alvarado in his hometown of Barquisimeto. He also received an honorary doctorate from the University of Gothenburg in 2012. In 2008, the Simón Bolívar Youth Orchestra was awarded Spain’s prestigious annual Prince of Asturias Award for the Arts and, along with his mentor José Antonio Abreu, Dudamel was given the “Q Prize” from Harvard University for extraordinary service to children.

Named one of Time Magazine’s 100 most influential people in 2009, Gustavo Dudamel was born in 1981 in Barquisimeto, Venezuela. He began violin lessons as a child with José Luis Jiménez and Francisco Díaz at the Jacinto Lara Conservatory. He continued his violin studies with Rubén Cova and José Francisco del Castillo at the Latin American Academy of Violin. His conducting studies began in 1993 when he was hired as an Assistant Conductor with the Amadeus Chamber Orchestra. In 1996, he studied with Rodolfo Saglimbeni and was given his first conducting position, Music Director of the Amadeus Chamber Orchestra. In 1999, he was appointed Music Director of the Simón Bolívar Youth Orchestra and began conducting studies with the orchestra’s founder, Dr. Abreu. Dudamel was brought to international attention by winning the inaugural Bamberger Symphoniker Gustav Mahler Competition in 2004. He then went on to become Music Director of the Gothenburg Symphony (2007-2012), where he currently holds the title Honorary Conductor. Inspired by Dudamel's early musical and mentoring experiences, the Gustavo Dudamel Foundation, a registered charity, was created in 2012 with the goal of promoting access to music as a human right and catalyst for learning, integration, and social change.

All videos related to Gustavo Dudamel (22) 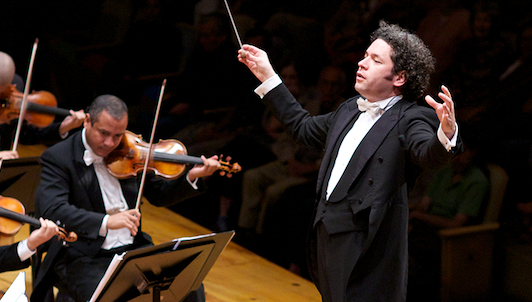 Gustavo Dudamel conducts Beethoven's Symphonies No. 1 and No. 2 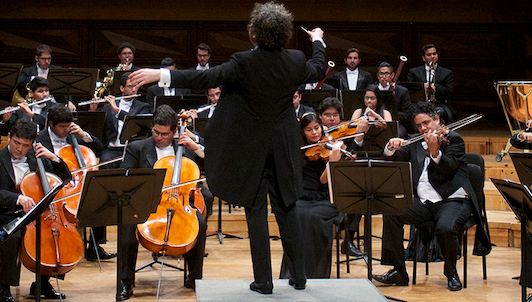 Gustavo Dudamel conducts Beethoven's Symphonies No. 3 and No. 4 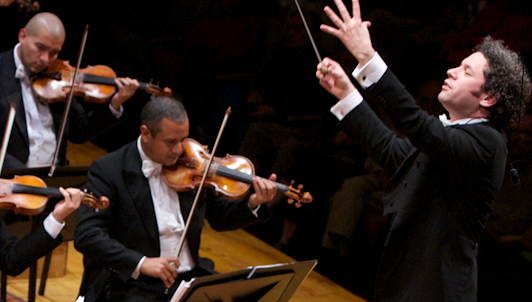 Gustavo Dudamel conducts Beethoven's Symphonies No. 5 and No. 6 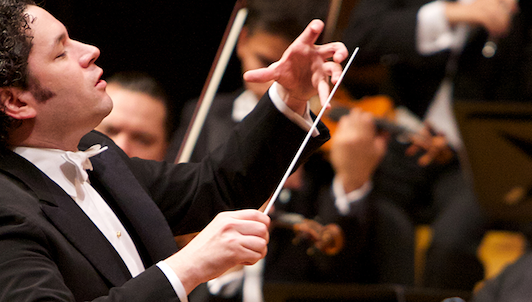 Gustavo Dudamel conducts Beethoven's Symphonies No. 7 and No. 8 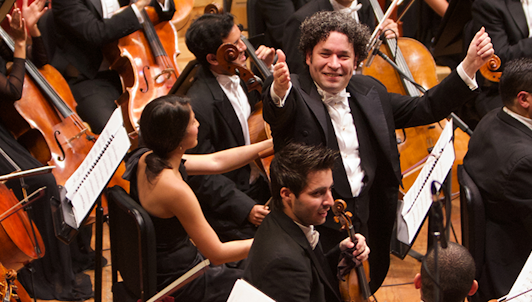 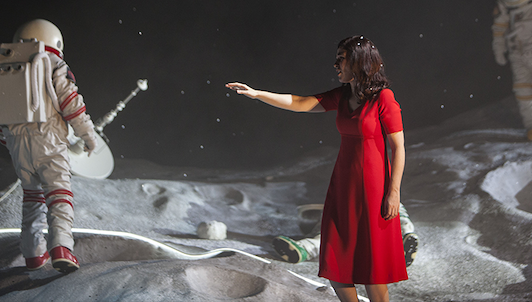 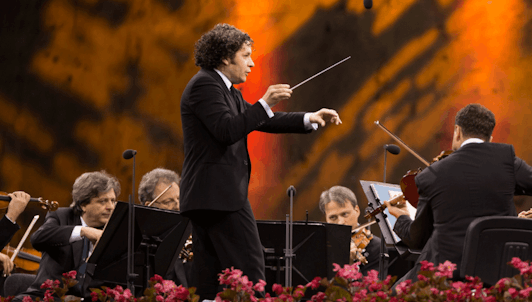 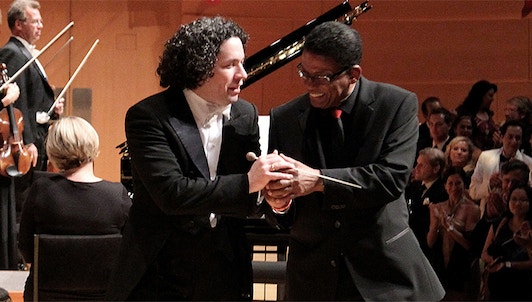 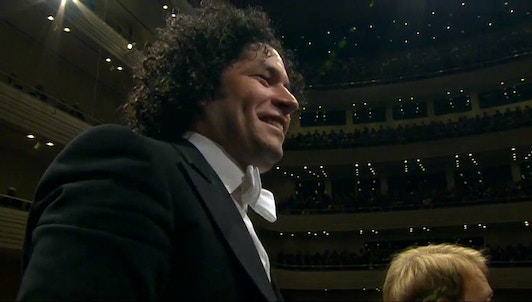 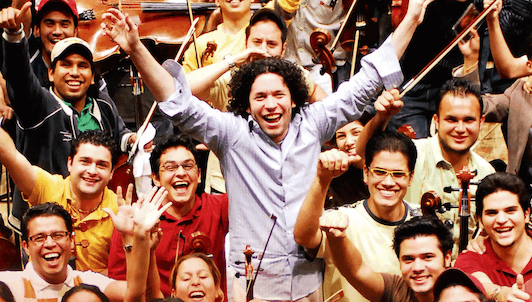 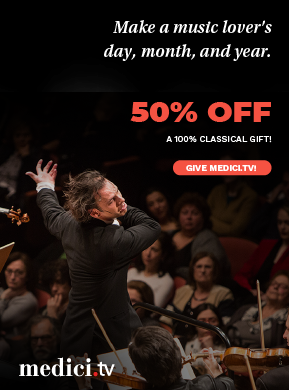 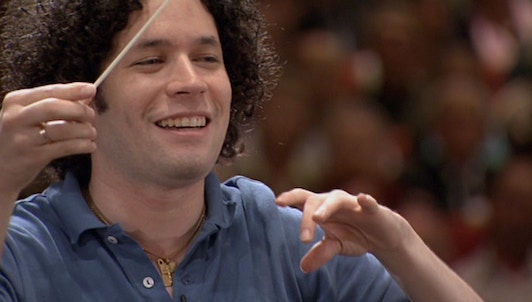 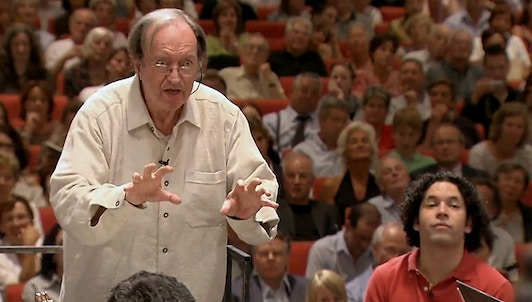 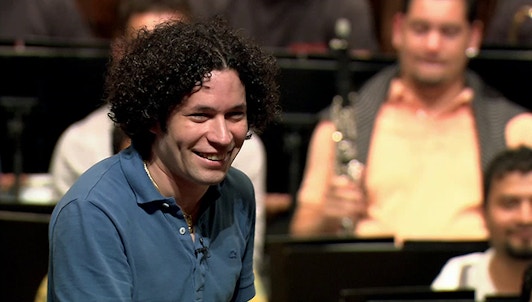 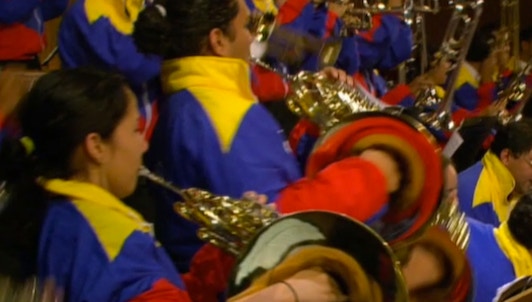 The Promise of Music 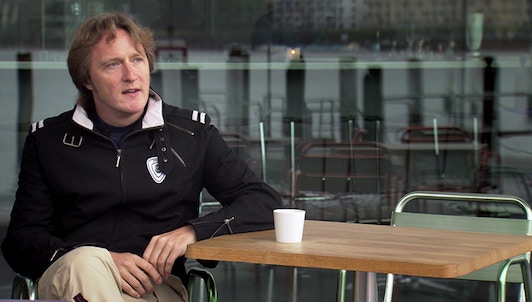 Portrait of the German oboist 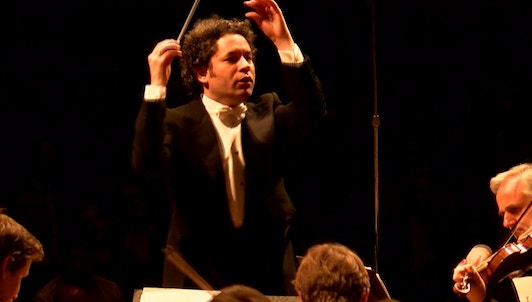 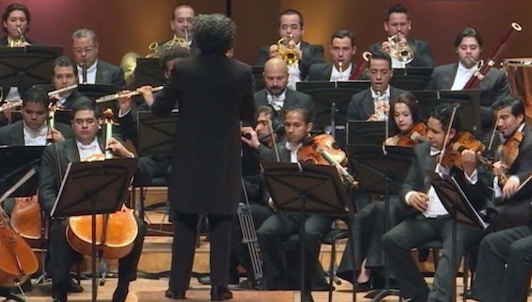 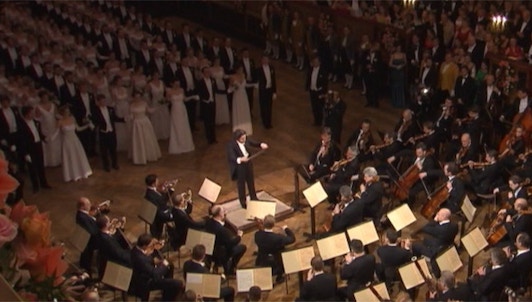 Dancing till dawn at the Philharmonic Ball 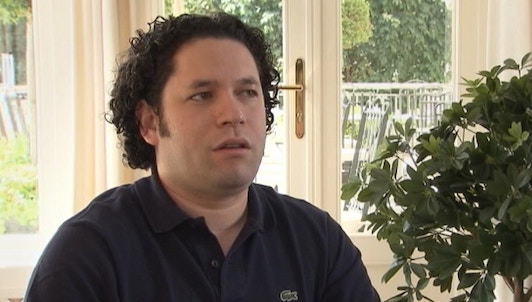 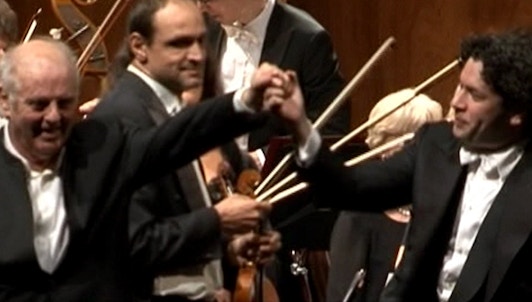 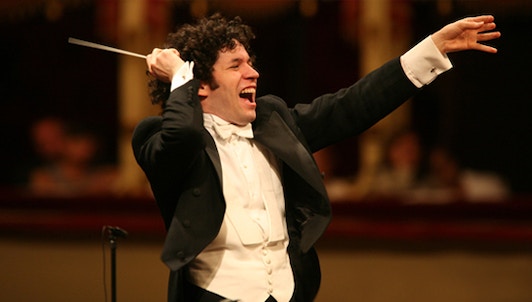