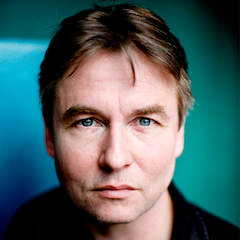 Esa-Pekka Salonen’s restless innovation drives him constantly to reposition classical music in the 21st century. He is currently the Principal Conductor and Artistic Advisor for London’s Philharmonia Orchestra and the Conductor Laureate for the Los Angeles Philharmonic, where he was Music Director from 1992 until 2009. This season is his second of three as the Marie-Josée Kravis Composer-in-Residence at the New York Philharmonic, and his first of five years as Artist in Association at the Finnish National Opera and Ballet. Additionally, Salonen is Artistic Director and cofounder of the annual Baltic Sea Festival, now in its fourteenth year, which invites celebrated artists to promote unity and ecological awareness among the countries around the Baltic Sea.

Salonen’s works move freely between contemporary idioms, combining intricacy and technical virtuosity with playful rhythmic and melodic innovations. Three major retrospectives of Salonen's original work have been critical and public successes: at Festival Présences Paris in 2011, at the Stockholm International Composer Festival in 2004, and at Musica Nova, Helsinki in 2003. His pieces for symphony orchestra include Giro (1982), LA Variations (1996), Foreign Bodies (2001), Insomnia (2002), and Nyx (2011), as well as two concertos: for pianist Yefim Bronfman and for violinist Leila Josefowicz. The latter won the prestigious Grawemeyer Award, is performed on three continents this year, and was featured in a 2014 international Apple ad campaign for iPad. Salonen’s most recent composition, Karawane, for orchestra and chorus, premiered during his time as the first-ever Creative Chair at the Tonhalle Orchestra Zurich, while his upcoming cello concerto for Yo-Yo Ma will premiere with the Chicago Symphony Orchestra this spring under Salonen's own direction, before going to the New York Philharmonic at home and on their European tour. The New York Philharmonic will also give the New York Premiere of his Wing on Wing, which was written for the Los Angeles Philharmonic's inaugural season at the Frank Gehry-designed Walt Disney Concert Hall and includes recordings of Southern California’s plainfin midshipman fish and distorted samples of Mr. Gehry’s voice.

Salonen takes the Philharmonia Orchestra to the Aix-en-Provence Festival, where they perform Debussy's Pelléas et Mélisande, directed by Katie Mitchell, and Stravinsky's Oedipus Rex in a new staging by Peter Sellars; the BBC Proms, and on tour in France, Spain, and the United States. He continues to lead the Stravinsky: Myths and Rituals festival, a return with the Philharmonia to works that Salonen has conducted to great acclaim for much of his career, as well as an exploration of rarely-performed pieces. Salonen and the Philharmonia also continue their groundbreaking experimentation with how to present music with a digital takeover of the Southbank Centre, featuring the first major virtual-reality production from a UK symphony orchestra, as well as the Philharmonia's award-winning RE-RITE and Universe of Sound installations, which have allowed people all over the world to conduct, play, and step inside the orchestra through audio and video projections. Salonen also drove the development of a much-hailed app for iPad, The Orchestra, which allows the user unprecedented access to the internal workings of eight symphonic works. In 2015 he addressed the Apple Distinguished Educator conference on the uses of technology in music education.

In 2016-17, Salonen conducts the premieres of a piano concerto by Icelandic composer Haukur Tómasson with the NDR Symphony Orchestra during their opening weeks at the new Elbphilharmonie and a concerto for four horns by English composer Tansy Davies with the Philharmonia. In addition he conducts the horn concerto at the New York Philharmonic, with whom he performs a celebration of his friend and long-time colleague Kaija Saariaho's music earlier in the season. At Carnegie Hall Salonen conducts three concerts with the Metropolitan Opera Orchestra, whom he led in Strauss's Elektra, one of the most critically-praised productions of the Met's 2015-16 season. This season he brings Elektra to his own Baltic Sea Festival and to the Finnish National Opera, where he will conduct his first full Ring Cycle in future seasons.

As the Music Director of the Los Angeles Philharmonic for seventeen years, Salonen is widely credited with revitalizing the organization. He was instrumental in helping the orchestra to open the Frank Gehry-designed Walt Disney Concert Hall, presided over countless premieres of contemporary work, began the Esa-Pekka Salonen Commissions Fund, and made the orchestra one of the best attended and funded in the country. This season Salonen returns to the LA Phil to curate and conduct a festival of Icelandic music.

Salonen has an extensive and varied recording career. An album of Henri Dutilleux's Correspondances, recorded with the Orchestre Philharmonique de Radio France in the presence of the composer, was released in 2013 by Deutsche Grammophon on the composer’s 97th birthday. Also that year, Sony completed a project that began with Salonen and the Los Angeles Philharmonic nearly 30 years ago: a two-disc set of the orchestral works of Lutosławski, released in what would have been the composer’s 100th year. In 2012 he recorded a disc of Saariaho's La Passion de Simone with the Finnish Radio Symphony Orchestra and Dawn Upshaw. Deutsche Grammophon has also released a portrait CD of Salonen’s orchestral works performed by the Finnish Radio Symphony Orchestra and conducted by the composer, as well as a CD with Salonen's Piano Concerto and his works Helix and Dichotomie. The latter, with the Los Angeles Philharmonic and Yefim Bronfman, was nominated for a Grammy in 2009. A CD of five of his orchestral works is available on Sony. 2012 saw the release of his recording of Shostakovich's previously undiscovered opera prologue Orango with the Los Angeles Philharmonic. In 2009 a new collaboration with the Philharmonia Orchestra's partner label, Signum, was launched with the release of a live recording of Schoenberg's Gurrelieder; other recent recordings with the Philharmonia on Signum include Berlioz's Symphonie Fantastique and Mahler's sixth and ninth symphonies. Salonen's 2008 recording of Schoenberg's Violin Concerto and Sibelius' Violin Concerto with Hilary Hahn and the Swedish Radio Symphony Orchestra won a Grammy Award. Other recordings include a DVD of Kaija Saariaho's opera L'Amour de loin, with the Finnish National Opera, as well as two CDs with Hélène Grimaud featuring works by Pärt and Schumann. The first CD recorded at Walt Disney Concert Hall, Salonen's recording of Stravinsky's Rite of Spring with the Los Angeles Philharmonic, was nominated for a Grammy in 2007.

Salonen is the recipient of many major awards, including the UNESCO Rostrum Prize for his work Floof in 1992 and the Siena Prize, given by the Accademia Chigiana in 1993; he is the first conductor to receive it. In 1995 he received the Royal Philharmonic Society's Opera Award and two years later, its Conductor Award. Salonen was awarded the Litteris et Artibus medal, one of Sweden's highest honors, by the King of Sweden in 1996. In 1998 the French government awarded him the rank of Officier of the Ordre des Arts et des Lettres. Salonen was also honored with the Pro Finlandia Medal of the Order of the Lion of Finland and the Helsinki Medal. Most recently he was honored with the 2014 Nemmers Composition Prize, which includes a residency at the Henry and Leigh Bienen School of Music at Northwestern University and performances by the Chicago Symphony Orchestra. To date, Salonen has received seven honorary doctorates in four different countries. Musical America named him its Musician of the Year in 2006, and he was elected an honorary member of the American Academy of Arts and Sciences in 2010.

All videos related to Esa-Pekka Salonen (13) 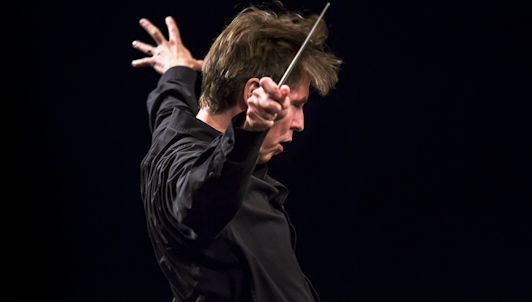 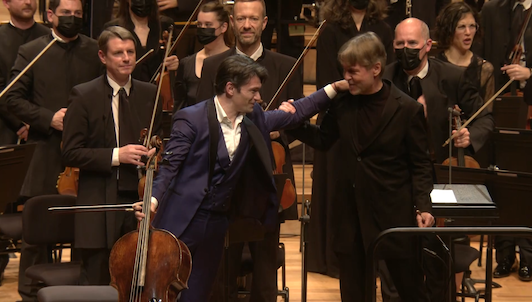 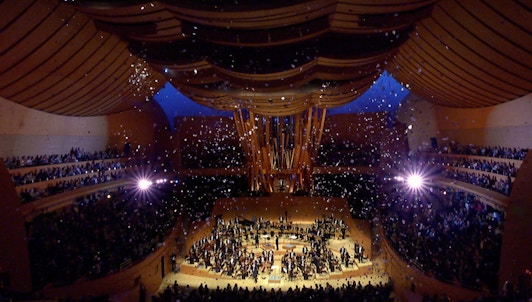 100 Years of the Los Angeles Philharmonic 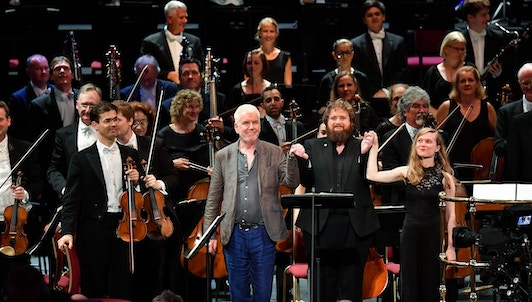 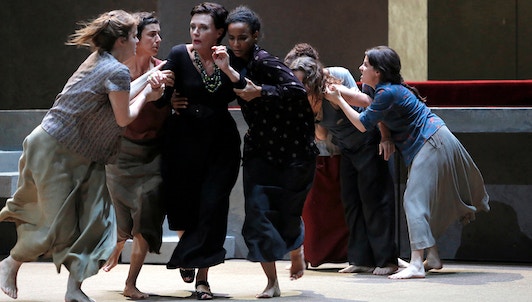 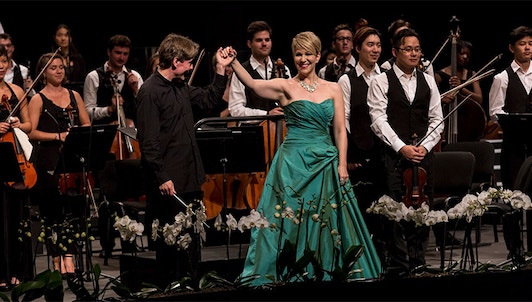 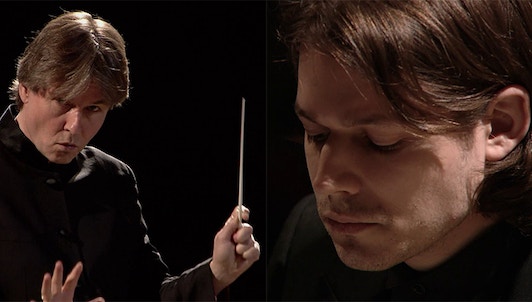 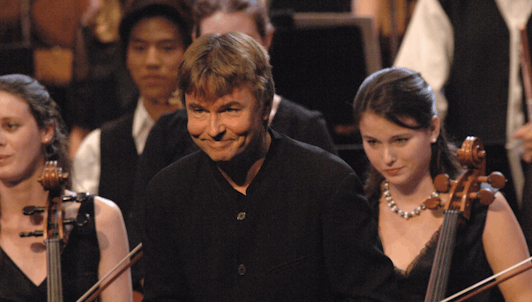 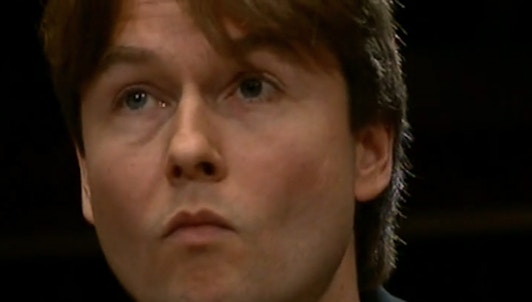 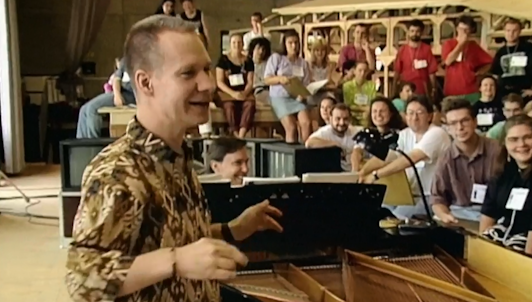 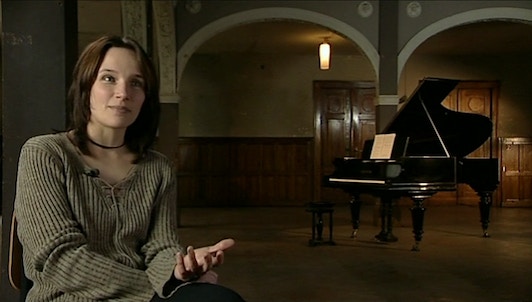 A Letter to Clara – With Hélène Grimaud

A reflection on love and music