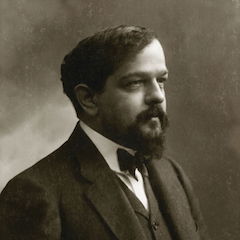 Claude Debussy, composer of the "bizarre"

Claude Debussy, whose parents were not musicians, received a solid musical education at the Paris Conservatoire with Marmontel (piano), Lavignac (theory of music), Durand (harmony), Franck (organ), Massenet and Guirand (composition) winning the Prix de Rome in 1884. During his stay at the Villa, his “parcels from Rome” scandalised the Institute, which criticised him for being “tortured by the desire to produce bizarre, incomprehensible and unplayable music”. Accused of “vague impressionism”, the young Debussy’s first works, however, appealed to the Parisian intelligentsia such as Mallarmé, Régnier, Laforgue, Verlaine and Louÿs at the beginning of the 20th century.

As early as 1894, Claude Debussy made an impression with his Prelude to the Afternoon of a faun (in French: Prélude à l’après-midi d’un faune), which set him apart from the pervading universe of Richard Wagner. Even though Debussy remained fascinated by the master of Bayreuth, his orchestration drew on Russian composers (Nikolai Rimsky-Korsakov and Modest Mussorgsky) or the musical discoveries of the 1899 Universal Exposition, (World Fair), without forgetting Satie’s search for simplicity whom he met at the Chat noir cabaret. Eluding all official posts or honours, while taking great care to criticise his fellow composers, Debussy spent the greatest part of his life composing. One of the most outstanding events was to be the first production of his opera Pelléas et Mélisande at the Opéra Comique in 1902.

Neither post-Romantic, nor impressionist nor symbolist, Claude Debussy’s style is difficult to define as his music reaches such heights of freedom. His orchestral works blur the melodic lines of the time offering sparkling, pure harmonies. The simultaneously formal, harmonic and rhythmic modernity of his piano pieces is impressive. Indeed, in his vocal compositions, his writing is so close to the modulations of a voice that they seem almost spoken. Admired by the generations to come, championed by composers in love with modernity, interpreted by all the greatest instrumentalists, Debussy’s work was destined to be timeless.