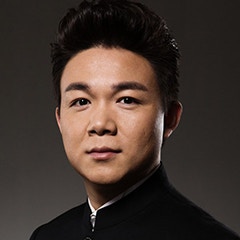 Graduated from the Central Conservatory of Music in Beijing. He has been a participant in the San Francisco Opera’s Merola Opera program for young singers (2012, USA). He won the 5th China International Voice Competition in Ningbo (2011) and the Yang Soohwa International Voice Competition in Korea. He also took third prize in the International Competition of the Chinese Musicians’ Association. At present he holds an Adler scholarship and is a soloist for the San Francisco Opera where he debuted as Wagner and Nereo in a production of Arrigo Boito’s Mefistofele. He appeared as a soloist in Beethoven’s Choral Fantasy for the Seiji Ozawa Academy. His opera debut at the National Centre for the Performing Arts in Beijing took place in 2011 when he took the roles of General Han (in the opera The Chinese Orphan by contemporary composer Lei Lei) and the Helmsman in The Flying Dutchman. He also sang Ernesto (Don Pasquale) in Shanghai.