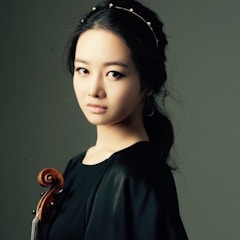 Graduated from Seoul National University and at present continues her studies at the Juilliard School in New York under Sylvia Rosenberg and Ronald Copes. In 2010 she took fourth place in the Sendai International Music Competition (Japan) and also won the audience favourite award. In that same year she was one of six finalists in the Jean Sibelius Competition in Helsinki. In 2011 she won the 3rd International Violin Competition in Qingdao (China) along with a series of special awards. In 2013 she won the second prize at the 62nd International ARD Competition in Munich (Germany). She has appeared in the finest venues in Vienna, Helsinki, Slovakia, Berlin, and Seoul alongside such orchestras as the Bavarian Radio Symphony Orchestra, the Finnish Radio Symphony Orchestra, the Helsinki Philharmonic Orchestra, the Munich Chamber Orchestra and many more. She plays a violin made by Giovanni Battista Guadagnini in 1774 provided by the Kumho Instrument Bank.