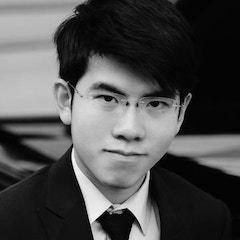 Aristo Sham, born in Hong Kong, was first introduced to the piano at the age of three, and joined the Hong Kong Academy for Performing Arts at the age of six under the tutelage of Professor Eleanor Wong. He was a student at Harrow School in the UK, where he worked with Professor Colin Stone, and is currently pursuing BA/MMus degrees as a joint programme at Harvard University and New England Conservatory, studying with Professor Victor Rosenbaum.

Having given concerts on five continents in countries ranging from Singapore and Argentina to Slovenia and Morocco, Aristo has played for Prince Andrew at Windsor Castle, Prince Charles and Camilla, Duchess of York, and the Queen of Belgium and President Hu of China on their respective visits to Hong Kong. He has also collaborated the Hong Kong Philharmonic Orchestra, English Chamber Orchestra, Orchestra at Temple Square in Salt Lake City and the Minnesota Orchestra.

Aristo was featured in the documentary The World’s Greatest Musical Prodigies, broadcast by Channel 4 in the UK, and was awarded a Fellowship with Distinction by the Royal Schools of Music (FRSM) in 2011.