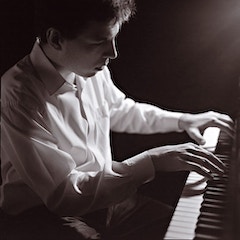 Andrei Korobeinikov started to play the piano at the age of 5 at the "Rovesnik" Children School of Music. He gave his first professional solo recital at the age of 8 at the Great Hall of the Baku State Academy of Music in Azerbaijan. In 2001 he entered the Moscow P.I. Tchaikovsky Conservatoire, in the class of Andrei Diev, from which he graduated with honors at the age of 19, as Sergei Rachmaninov did in 1892! In 2004 he won the first prize at the Alexander Scriabin International piano competition in Moscow and in 2005 the II prize with the Audience prize at the Sergei Rachmaninov International piano competition in Los Angeles. In 2006 he obtained the Gill & Julian Simmonds' Scholarship and entered the postgraduate course at the Royal College of Music in London in the class of Vanessa Latarche. Besides, in addition to his piano studies, Andrei Korobeinikov entered the law faculty of the European Law University in Moscow, from where he graduated with honours.

In 2006 he made his debut at La Roque d’Anthéron Festival in France, then he participated in the "Folle Journée" in Nantes and went to Rio de Janeiro and Tokyo. In January 2007 he played for the first time in London, conducted by Vladimir Ashkenazy in the Concerto No. 2 by Rachmaninov.

During his career he has performed concerts in more than 30 countries and has appeared in such relevant venues for classical music as the Théâtre des Champs-Élysées in Paris, the Walt Disney Concert Hall in Los Angeles, the Linder Auditorium in Johannesburg, the Great Hall of the Moscow Conservatoire, the Sala Verdi in Milan, the Sala Cecília Meireles in Rio de Janeiro, the Suntory Hall and the Hamarikyu Asahi Hall in Tokyo, the Wigmore Hall in London, the Konzerthaus in Berlin, the Laeiszhalle in Hamburg, the Španělský sál in Prague, the Teatr Wielki in Warsaw, the Béla Bartók National Concert Hall in Budapest and the Great Hall of the Saint-Petersburg Philharmony.

Andrei Korobeinikov has also participated in several festivals such as La Roque d'Antheron, the Festival de Radio France et Montpellier, the Festival de musique de Menton and La Folle journée (France), the Klarafestival (Belgium), the Sommets musicaux de Gstaad (Switzerland), the Young Euro Classic (Germany), the Art-November, the Northern Flowers (Russia) and many others. His performances were broadcast by the TV channels Arte, Mezzo, Kultura (Russia) and by such radios as BBC-3, France Musique, NDR Kultur and others.

His discography includes Alla Pavlova : Elegy for piano & string orchestra released by Naxos in 2007, two CDs released in 2008 by Mirare (Scriabine) and by Challenge Classics (Elgar and Grieg), and the CD of the Sonatas by Beethoven released by Mirare in 2009.