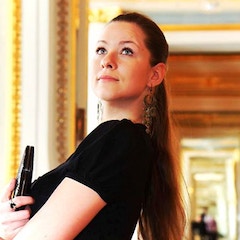 Mezzo-soprano Alisa Kolosova was born in 1987 in Moscow and began her musical studies at the age of five. Already at a very young age she won first prizes at several vocal competitions in Russia. In 2004/05 she studied at the Russian Academy of Theatre Arts (Faculty of Musical Theatre) in Moscow, where she worked with the famous vocal teacher Evgeniy Zhuravkin. From 2005 to 2007 she studied at the vocal department of the Moscow State Conservatory College. She took part in master classes with Makvala Kasrashvili, Sergei Leiferkus, Thomas Quasthoff and Christa Ludwig.

In 2008 she was a finalist at the Competizione dell’Opera in Dresden and participated in a production of Puccini’s Suor Angelica at the Russian Academy of Theatre Arts. In the autumn of 2008 she perfomed the contralto solo part in Mozart’s Requiem in Moscow and returned in December as mezzo-soprano soloist in the Oratorio de Noël by Saint-Saëns.

In January 2009 she was awarded the Special Prize of the Jury at the Francisco Viñas competition in Barcelona. In the summer of 2009 she was a member of the Young Singers Project at the Salzburg Festival, where she also took part in a concert conducted by Ivor Bolton. Since October 2009 Alisa Kolosova has been a member of the Atelier Lyrique at the Opéra National de Paris. Besides a revival of the Salzburg Festival production of Betulia liberata under the baton of Riccardo Muti at the Ravenna Festival, Alisa Kolosova has recently performed in Il viaggio a Reims (Marchesa Melibea) in Accademia Rossiniana production at the Rossini Opera Festival in Pesaro; Eugene Onegin (Olga) and Orfeo ed Euridice (Orfeo) at the Opéra National de Paris; Handel’s Messiah at the Norske Opera in Oslo and at the Kennedy Center in Washington (National Symphony Orchestra) under Rinaldo Alessandrini; Rusalka at the Glyndebourne Festival; and Handel’s Theodora (Irene) on tour with Les Arts Florissants directed by William Christie.

In August 2014, she is among Plácido Domingo's 2014 Operalia finalists.