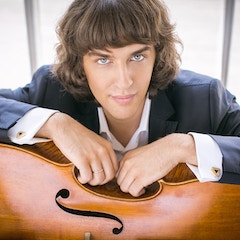 Graduate of the Moscow Conservatory studying under Prof. Natalia Shakhovskaya (2012). He is currently pursuing advanced studies there and at the Hanns Eisler School of Music Berlin under Prof. Frans Helmerson. He has won prestigious international competitions, such as the 5th UNISA International String Competition in Pretoria (South Africa, 2010, fourth prize), the 3rd Beijing International Music Competition (2010, first prize), and the Paulo Cello Competition in Helsinki (2013, third prize). In 2010 he won the 1st Russian National Music Competition in Moscow, and in 2011 he participated in the XIV International Tchaikovsky Competition. He has performed in the world’s foremost concert venues, including the Concertgebouw, the Brucknerhaus in Linz, and the Concert Hall of the Mariinsky Theatre. Since 2012 he has been part of the concert programme of the Moscow Philharmonic. He plays a modern instrument made by Jebran Yakoub.