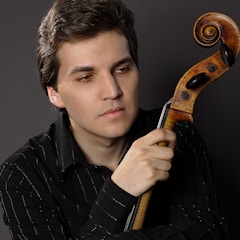 Graduated from the Moscow Conservatory studying under Prof. Natalia Gutman (2006) and is continuing his studies at the Conservatory. In 2005 he won second prize at the ARD International Music Competition in Munich, and in 2007 he took the silver prize and was awarded two special prizes at the XIII International Tchaikovsky Competition in Moscow. In 2008 he took second place at the 63rd Geneva International Cello Competition, and in 2010 he won at the Emanuel Feuermann Competition in Berlin. He frequently performs on tour in Russia and abroad and appears with many leading domestic and European orchestras. In 2005 he made his début at Carnegie Hall and Lincoln Center in New York. He participates in the festivals of Colmar, Montpellier, Verbier, as well as in events such as the Russian Musical Olympus forum, the Stars of the White Nights, and Moscow Autumn among others.